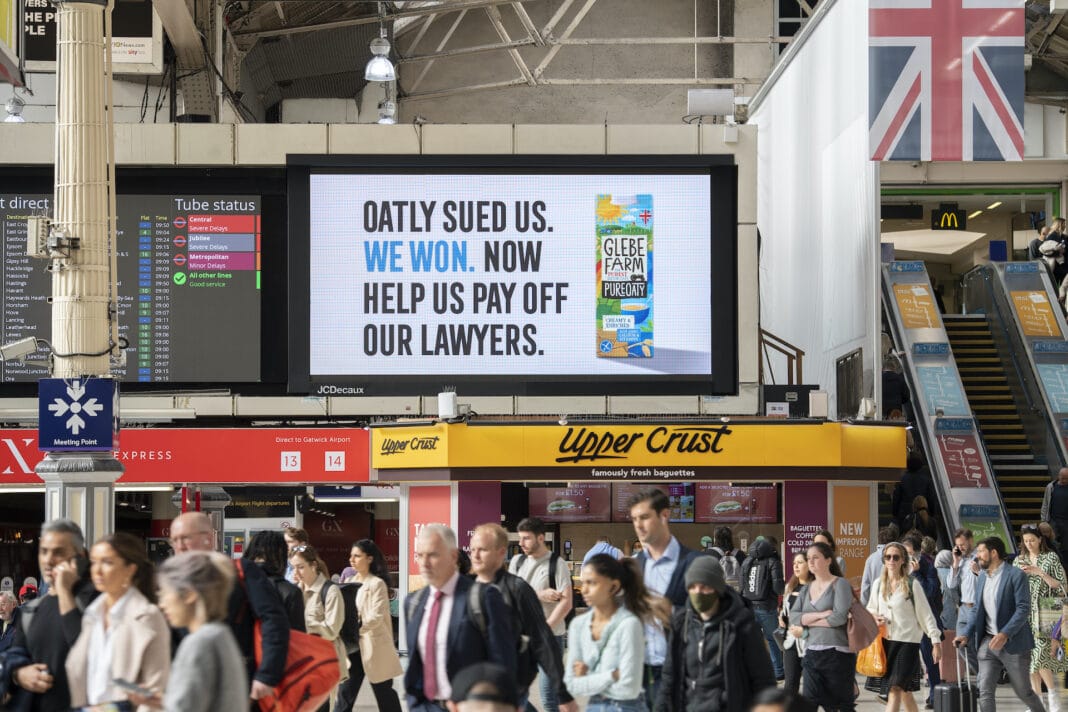 In a disruptive above-the-line campaign to remind consumers about its 2021 court victory over Oatly, Cambridge-based Glebe Farm took over billboards at London Victoria station on 9 May.

The billboards referenced the legal battle between Glebe Farm and the Swedish oat milk brand, using the message ‘Oatly Sued Us. We Won’ followed by either a playful request to ‘help us pay off our lawyers’ or a reminder to support ‘true British oat milk’.

The family run oat milk producer was taken to court by Oatly to defend claims of brand and trademark infringement, but the allegations were rejected by the judge.

After winning the court
case against Oatly, it has made us want to be more disruptive in our campaigns

The billboards also serve to highlight the fact that Glebe Farm drinks are made on-site and so offer ‘a lower carbon footprint than its European rivals’.

“At a time when sustainability and championing local, British brands is at an all-time high, we wanted to remind people with a playful campaign that our oat m*lk is the most sustainable oat m*lk in the UK – and travels far less ‘food miles’ to get to customers than most other brands,” says Glebe Farm owner Philip Rayner.

“After winning the court case against Oatly, it has made us want to be more disruptive in our campaigns. We’re known as the oat m*lk brand that beat Oatly, but we’re so much more than that. We are true, British oat m*lk. And proud of it!”

In an official statement, Oatly responded: “Nice job on the billboards! We’re flattered by the shout out. We can’t wait to open our UK factory in Peterborough next year where we’ll also be buying oats from British farmers and creating around 200 new jobs. We wish our future neighbours well as we all work towards our shared goal of a more sustainable food system. See you in 2023!”