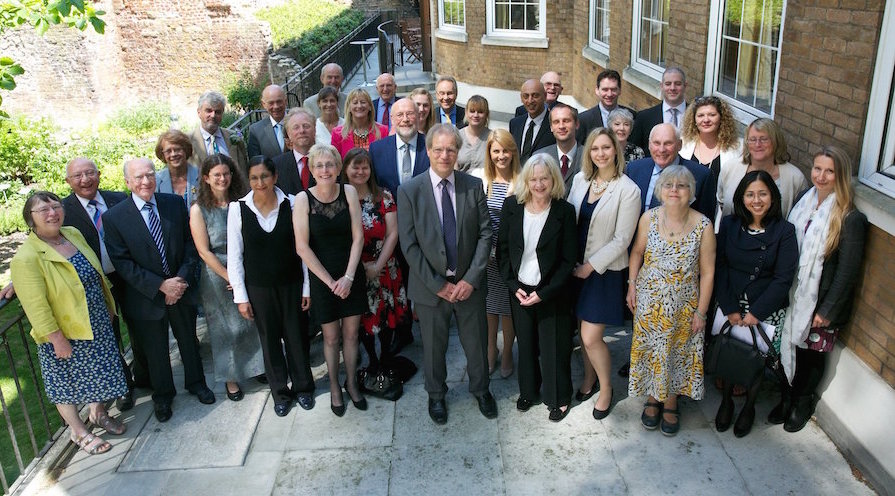 Board members past and present, company members, academics, supporters and regulators all came together to celebrate the 50th anniversary of the British Herbal Medicine Association at a special lunch in London last week.

Around 90 people gathered on a warm, sunny day at the historic Barber-Surgeons’ Hall in the City of London. After a drinks reception, and opportunity to view some displays representing the BHMA past, present and future, guests were invited to visit the Hall’s Physic Garden – dating back to the 16th Century – and hear about its association with the famous botanist and herbalist John Gerard.

A wonderful three-course lunch was then held in The Great Hall – presided over by Holbein’s portrait of Henry VIII with the Barber Surgeons – which concluded with speeches by the current BHMA chairman Dick Middleton and past president Victor Perfitt.

Perfitt said he wanted to give a snapshot of the people – and characters – who have shaped the BHMA over the years, from its inception in the mid 1960s right up to the present day. Many – though sadly not all – included in the roll call were present, and some received some good-natured ribbing along the way, which was the cue for much laughter (and possibly the odd tear or two). It was a rollercoaster of a speech, invoking memories of landmark achievements and battles fought, and the many highs and lows that have punctuated the last half century.

In his speech, Dick Middleton recorded the many achievements of the past 50 years and the pivotal role of the BHMA in securing a sound future for herbal medicine into the 21st Century. He recalled the enormous personal effort of BHMA members in driving the legislative changes leading to the creation and implementation of the THMPD, and the UK’s THR scheme, which had transformed the herbal medicine landscape. There was special praise for the smaller UK companies who had demonstrated that the commercial and technical demands and challenges of the THR scheme were not insurmountable.

Middleton also thanked the regulator, the MHRA, for its vital contribution – and praised the MHRA team for their “tenacity and dogged determination to press on in an often hostile environment”. He acknowledged that tensions sometimes existed between industry and regulator. “There were occasions when we glared at each other over a table,” he said. But professionalism, patience and a real desire to succeed, in the interests of public safety, had always prevailed.

The important role of the BHMA’s publications over half a century was also recognized. The 1983 edition of the British Herbal Pharmacopoeia, specially reprinted for the 50th anniversary celebrations, was singled out as a “seminal publication” that illustrated “very well why the BHMA gained such enormous international respect during its first 50 years with its publication of herbal pharmacopoeias and compendia.”

Amid the celebrations and reminiscing, there were some serious points too. Middleton said that real challenges remained with herbal products that sit on the borderline between medicine and food. The status of botanicals remained a major concern. He told the audience: “Under current regulations, it is impossible to know definitively which botanical products are of acceptable quality and which are not.” With “soft regulation in the ascendancy” there was the danger that products containing the wrong herb, or that are adulterated in some way, would continue to reach the market. Unless the situation – known in the US as ‘economically motivated adulteration’ – was robustly confronted, Middleton warned, “there will be a progressive undermining of the whole health products industry in the UK”.

“Under current regulations, it is impossible to know definitively, which botanical products are of acceptable quality and which are not”

Middleton’s speech ended on an upbeat note, with warm thanks and congratulations to the BHMA’s Board members, colleagues and supporters. He noted that business, though often serious, was typically conducted in a spirit of friendship. Earlier, Victor Perfitt recalled a letter from the MHRA’s Dr Linda Anderson in which she described a previous BHMA gathering as being “like a family wedding”. As one of the lunch attendees told Natural Products News, this month’s 50th anniversary lunch was also like “a big family wedding, with good times and not so good times discussed with relish!”.