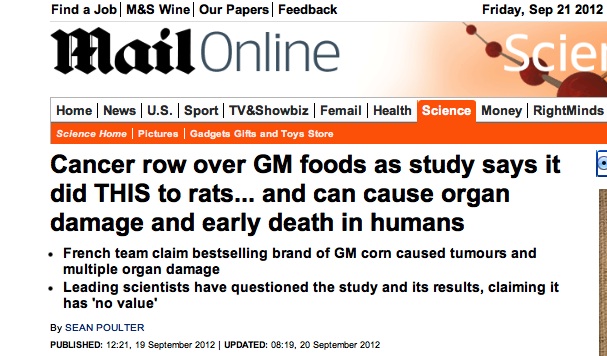 The scientists say that their findings raise further serious questions about the safety of GM food and reassurances given by the biotech.

But the French team’s methods have been challenged by some other scientists who claim the type of rats used in the study have a natural propensity to develop tumours.

The French team was led by molecular biologist Professor Gilles-Eric Seralini. Its peer-reviewed study is said to be the first to look at the impact of eating a GM diet over a lifetime in rats (two years).

During the trial the rodents were fed a GM maize known as NK603, a product of Monsanto that is engineered to resist its herbicide Roundup. Some rats ate engineered maize sprayed with Roundup; some ate just the GM maize with no herbicide present; and a third group consumed no GM material but had traces of Roundup introduced into their drinking water. A fourth group acted as the control, and were fed a non-GM maize and non-tainted water.
The researchers found that between 50 to 80 per cent of female rats developed large tumours by the beginning of the 24th month, with up to three tumours per animal – just 30 per cent of the control rats developed tumours.
Up to 70 per cent of females also died prematurely – compared with only 20 per cent in the control group

The French scientists noted that the majority of tumours were detectable only after 18 months – meaning they could be discovered only in long-term feeding trials.

Professor Seralini said the GM corn and Roundup weedkiller “may cause hormonal disturbances in the same biochemical and physiological pathway”.

Mustafa Djamgoz, professor of Cancer Biology at Imperial College, told the Daily Mail: “We are what we eat,’ he added. I work at the molecular level on cancer. There is evidence that what we eat affects our genetic make-up and turns genes on and off. This not scaremongering. More research is warranted.”

But Anthony Trewavas, professor of cell biology at Edinburgh University, said the study was too small to be meaningful. He told the paper: “To be frank, it looks like random variation to me in a rodent line likely to develop tumours anyway.”

• The Alliance for Natural Health has acknowledged that the French study contained weaknesses – “the extreme tendency for these rats to develop tumours in later life” and a small sample size (“a recipe for apparent results to being generated by chance alone”) among them – but insisted it was a “definite yellow canary”.

The campaign group concludes that the results are “cause for profound concern” and calls for more long-term feeding studies using different strains of rodent. It also says that the Seralini study has exposed the “gross inadequacy” of the standard 90-day ‘lifetime’ studies carried out by the biotech industry.