A new report highlights the extent to which medicines, lifestyles and poor diet are ‘killing’ vitamin and mineral levels, leading to potentially serious health issues for women.

The UK National Diet and Nutrition Surveys (NDNS) has revealed a marked drop in women’s intake of most vitamins and minerals, with deficiencies being linked to a host of health issues, some potentially very serious. 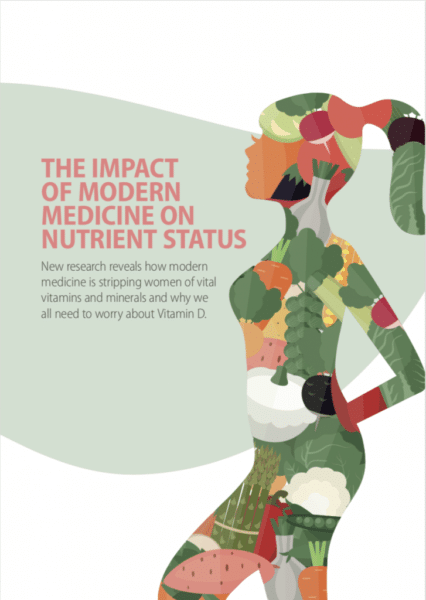 Clinical nutritionist Suzie Sawyer says: “There’s been a marked – and hugely worrying – drop in women’s intake of most vitamins and minerals. Many people have little time for cooking from scratch and this has meant many people rely on fast food, takeaways and ready meals. In addition, the trend for popular exclusion or weight-loss diets, together with social media ‘influencers’ pushing potentially unhealthy eating regimes, has meant whole food groups can be missed out on. It’s perhaps no surprise that so many of us are failing to manage an adequate nutrient intake, with gaps and deficiencies in a host of crucial vitamins and minerals.”

The pill and hormone-related issues
Since the pill – the oral contraceptive for women – first became available in Britain in 1961, its use has spread rapidly and it has gained widespread acceptance. However, the new report reveals that many women are unaware of the potential side effects from use of the contraceptive pill or HRT, in particular issues with nutrient status.

Clinical pharmacist and researcher Mike Wakeman says: “Research from as far back as the 1970s clearly demonstrates that oral contraceptives are linked with depletions of a number of vitamins, minerals and other nutrients. A variety of reports have also identified these effects might possibly contribute to several common side effects. This aspect is particularly relevant to those women who may not have an adequate diet. Furthermore, women whose lifestyle is unhealthy and those with problems absorbing or metabolising certain nutrients will also be at risk.”

Wakeman adds: “This means that for many individuals nutrient intake is already suboptimal, and that taking the pill – with the potential negative impact on nutrient levels – is likely to further compromise the situation. The use of supplements, for women taking the pill – especially those with a poor diet or pre-existing health issues – would appear to play a key role in targeting this issue.”

The Alive! Report also takes an in-depth look at some of the complex interactions triggered by the use of oral contraceptives, including how they can affect oxidative stress and disrupt the way the body metabolises fats and carbohydrates and processes sugars.

In addition, the report reviews how the use of the pill can negatively affect a woman’s folate status – crucial for protecting against neural tube defects in early pregnancy – and how folic acid supplements can be an important strategy for women looking to become pregnant.

The latest data revealed in the report would seem to be at odds with many women’s knowledge of the risks and issues of taking the pill. Of more than 1,000 women aged 18 to 64 across the UK, every single woman questioned by the researchers had either taken the contraceptive pill, hormone replacement therapy (HRT) or both at some period in their life. Nearly nine out of 10 (88%) had taken the contraceptive pill, a further 5% had taken just HRT and 7% had had both.

Changes included a ‘generally healthier diet’ (19%), eating more vegetables (12%) and taking a vitamin and mineral supplement (11%). Most – 70% – of women had either been pregnant or had tried to conceive, and 64% felt their diet and nutrition status were ‘very important’ when planning to get pregnant, and a further 23% felt they were ‘quite important’. Folic acid is essential for the early part of a pregnancy to protect against neural tube defects, yet a third of those questioned (34%) didn’t know this and the same number (33%) admitted they had never taken folic acid supplements.

Spotlight on vitamin D
The last part of the report focused on issues around vitamin D. The nutrient is revealed to be at the centre of one of the most pressing issues in the fight to maintain good nutrition. Vitamin D is synthesised in our bodies from sunlight and plays a huge role in maintaining good health, particularly bones and muscles.

In addition, researchers have found new evidence linking the vitamin with far more than just bone health – it’s thought that heart disease, cancer, multiple sclerosis, asthma, depression and type 2 diabetes, to name just a few, may be associated with poor vitamin D levels. It’s particularly worrying as figures show that nearly a third of adults have intakes so low as to risk deficiency.

A key problem is that the main source of vitamin D is sunshine rather than from food – even in a healthy diet it’s hard to get the recommended amounts of the vitamin. But in the UK we often have poor levels of sunshine, especially in the autumn and winter months, and this can leave vitamin D levels in the body severely depleted. Such is the concern over the issue, Public Health England changed its recommendations in 2016, saying that all adults and children over the age of one year old should consider taking a 10 microgram vitamin D supplement, especially during autumn and winter when there is limited sunlight. In addition, the DoH says all babies from birth to one year old, all children aged one to four and people who aren’t exposed much to the sun should take daily supplements to make sure they get enough vitamin D.[3]

Research commissioned by Alive! backs up these findings. Only 27% of the 1,000 respondents polled knew that a healthy diet alone does not provide optimum levels of vitamin D, with nearly half (47%) of respondents believing it was a possibility, despite this being almost impossible in practice. There were big gaps in understanding and knowledge in the workings of vitamin D. Half (50%) of respondents didn’t know that some over the counter and prescribed medicines can reduce levels of vitamin D in the body, rising to 71% in the over 60s.

GP Dr David Edwards says: “Healthy levels of vitamin D are key to day-to-day health. However, this is also problematic because many people in the UK appear to have low levels of vitamin D – it’s thought that more than 50% of adults have insufficient levels of vitamin D and that 16% have severe deficiency during winter and spring.  The worry is that this shortfall will leave many of these people more vulnerable to health problems, some of which may be very serious. Both the poor level of vitamin D status and the importance of the nutrient in good health mean it would be prudent for many people to take a daily vitamin D supplement, particularly during the winter months when sunshine levels are low. It’s a simple and easy change that may well bring substantial benefits.”