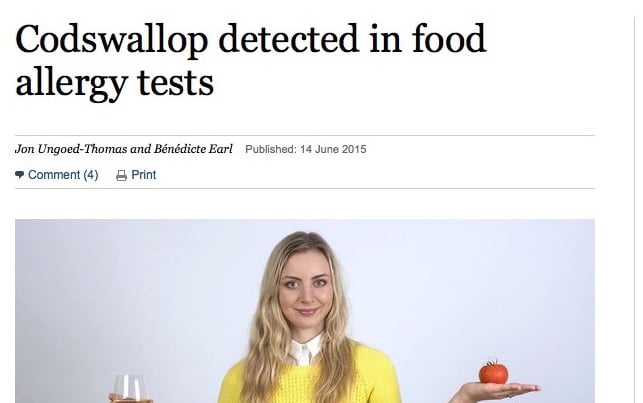 Skeptic group the Good Thinking Society has warned that allergy and food intolerance tests “that have no scientific basis” are being widely used in natural health clinics.

The Society, which has previously investigated chiropractic, homeopathy, kinesiology and osteopathy, recently sent out an investigator to take a series of allergy tests at high street natural health clinics.

The investigator was offered a variety of tests and techniques costing up to £95, including Asyra scanning and hair sample testing. The tests are claimed to indicate sensitivity to over 100 food types but were described by the project director at the Good Thinking Society as “pseudoscientific and often nonsensical”.

Last weekend The Sunday Times launched its own investigation, and sent out a reporter to undertake similar tests. In its report, the  newspaper details how its journalist received conflicting information and advice from each of the clinics.

But the practitioners involved in the tests all defended their methods One of them, Robin Ravenhill, from the Eastbourne Clinic of Natural Medicine, told the newspaper that the reporter who had undertaken the tests had a “hidden agenda” which had compromised the testing and results. Another argued that food intolerances could change over a very short period time, and should therefore form part of a more comprehensive assessment.

Picture: How the Sunday Times reported the story