In July, Bristol saw the opening of a third branch of Preserve Foods, a zero waste store founded by Tiriel Lovejoy, this time in the village-like suburb of Westbury-on-Trym.

Being already in the ‘mindset’ to open another shop after being let down at the last minute over a venture with another retailer, Lovejoy decided to go ahead and look for suitable premises to make his offering accessible to more people.

“We literally signed the lease on the day the country went into lockdown which was a bit of a gamble,” says Lovejoy. “It meant I couldn’t do it as quickly as I normally would – I did it up slowly and didn’t pre-plan much of the shop unit or pre-order many products as I didn’t have an opening date in my mind. We were hoping things would get more relaxed, which they did, but not enough to be normal again, so we just had to open.”

After a number of challenges along the way – ‘it seemed like we had to do every job three or four times’ – the store finally opened its doors on 16 July, just over two years after the first store and a year after the second store, which Lovejoy launched in partnership with his brother.

Some zero waste retailers have a reputation of being expensive or elitist or only for middle-class people, and we really don’t want that

The third store, which spans around 40sqm, stocks a similar mix of products and has the same look and branding as the other shops. It has a range of about 500 items covering ‘pretty much everything’, including dried goods and staples from flours, baking ingredients, nuts, herbs and spices to vinegars, oils, nut butters, snacks, tea and coffee, pulses and pasta.

On the non-food side its sell plastic-free, ethical and organic toiletries such as bamboo toothbrushes, natural deodorants, shampoo bars and face creams, and a range of refillable liquids like shampoos and bodywashes. The shop also stocks household items like beeswax wraps, lunch boxes, coffee cups, washing up pads, and toilet paper as well as refillable cleaning products.

With regard to design, Lovejoy wanted to avoid the ‘country cottage style’ of many zero waste stores. “I’ve gone for a more practical approach. It has brick wallpaper, wooden floors, garage-style metal shelving – which makes it more flexible – and then all the gravity dispensers. So it’s more like an industrial warehouse look.” 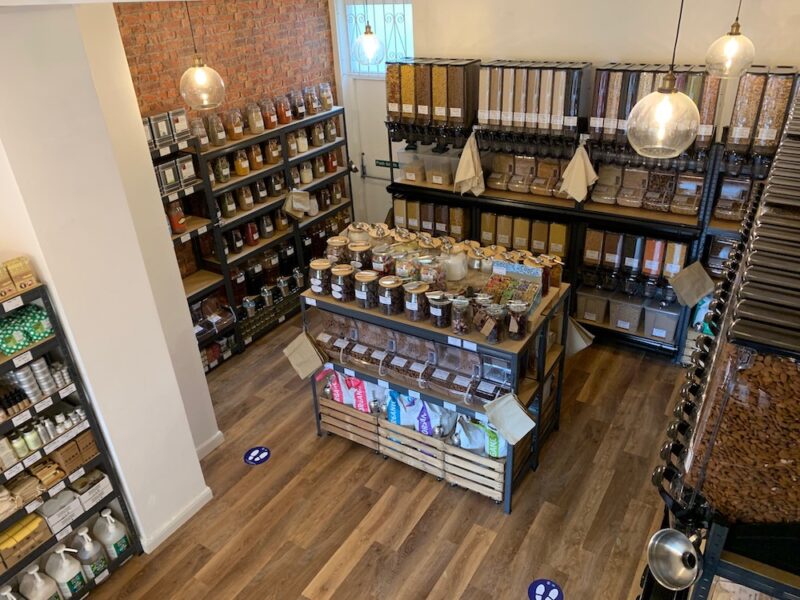 As to the ethics of the store, Lovejoy says the emphasis is on three basic principles. “First of all, we are plastic-free as much as we can be. We also try to sell as much organic food as possible – I’d say about 90% of our range is organic – this is important to us in terms of sustainability. Then, all of our food is vegan, again this ties in with sustainability. The store is what people would call a zero waste shop – obviously that in itself is an aspiration rather than a reality, but we try to be as good as we possibly can.”

Lovejoy also uses as many local, ethical and circular suppliers as possible. “As we’ve gone on we’ve found more circular suppliers, so they deliver in a container, we use the product, send the container back, they clean it, fill it and return it to us. We do that with all our cleaning liquids, some of our oils, and we even sell crisps without any packets – they come in a big bucket we sell them loose. That’s the dream, if everything could be done like that that would be perfect, but you just have to have a balance.”

Affordability is also a top priority for Lovejoy who has spent most of his career in food retail and worked for discounters including Aldi and Lidl. “Some zero waste retailers have a reputation of being expensive or elitist or only for middle-class people, and we really don’t want that,” he explains. “This is where organic actually helps us because if I were to sell non-organic pasta or rice for example, there’s no way I could ever sell it as cheap as the supermarkets – I can’t even buy it for what they sell it at. However when I sell organic food I can meet or beat the supermarkets on pretty much everything. So on everyday items like rice and pasta we’re probably the equivalent of a supermarket, but on things like seeds and herbs and spices we’re way, way cheaper so it allows us to be really, really competitive on price while selling a good quality product. It’s really important to me that we make what we do accessible to everyone otherwise there’s no point.”

Lovejoy doesn’t discount future expansion but wants to take time to ‘see where we are’. “At this point I don’t have a plan to go massive because I like being hands-on in the shop and talking to customers and doing day to day activities. I don’t want to be remotely managing – it’s not the same.”