The historic UK spa town of Tunbridge Wells is the venue for one of the country’s newest plastic-free retailers.

The recent arrival of The Zero Waste Company in the town – the store opened in early November – is further confirmation that the plastic-free phenomenon is gathering pace.

Located in the Pantiles, a colonnaded 17th century shopping street, the business is the brainchild of friends and business partners Charlotte Bowyer and Holly Watson.

The pair (pictured), who have freelanced for a number of years in social media and branding consultancy, got to know each other through a local parenting group. Bowyer explains: “We’ve both got children around 18 months. We were originally interested in setting up a shared workspace business, and started reaching out to other mums locally. But as Holly and I got to know each other we realized we had a lot of shared values, particularly around sustainability and plastic-free.

“Initially my own interest was cruelty-free, but that led me to think about the wider issue of sustainability. Holly was further down the road than me in her thinking about plastic-free – she comes from a completely zero waste home background.

One-stop shop
“We’d seen a number of pop-up zero waste shops coming and going. They were great in themselves, but what they didn’t offer was a full-shop opportunity. And that really was the inspiration behind The Zero Waste Company – we wanted to be that one-stop shop.”

In May of this year Bowyer and Watson began scoping out potential retail units. They eventually settled on a double-fronted store in the Pantiles, previously a farm shop. At around the same time an intense period of product sourcing research got underway. The pair are both new to retail, and admit the learning curve was a steep one.

“It’s been a lot of work to get to where we are,” says Bowyer. “And it’s been very, very hands on.” Husbands and friends were recruited to help work on the store fit-out. “We did everything. Painting, building counters and fixtures – everything that could be is upcycled, and there’s lots of use of old or reclaimed wood.”

When NPG visited The Zero Waste Company, the store had been open for just three weeks, but it already felt established, with a welcoming atmosphere and friendly and knowledgeable staff. “We’ve got a great team now, and that’s helping both of us finally to find a bit of balance,” Watson says.

The store lives up to its full-shop promise. On the food front there is everything from dried goods – including an impressive array of pulses, seeds, grains, nuts, dried fruit, dried pasta, baking ingredients (delivered from a battery of over 100 gravity bins) – to oils, herbs and balsamic vinegars; and from deli counter produce (vegan cheese a speciality) to refill milk, ice cream, pasta sauces and seasonal fruit and veg. 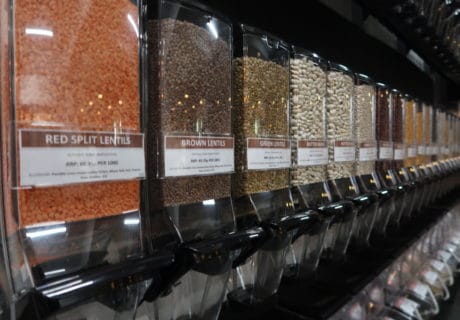 There’s a good sized refill station dispensing household cleaners, window cleaner, detergents and fabric conditioner (these come from Oxford-based SESI, who will take back their 20l containers, keeping them in a reuse loop). Natural and organic cosmetics and personal care products (including a wide selection from Zao) are ranged at the front of the store, close to a good selection of eco gifts. And there’s even a small selection of toys and books, including hand-finished, sustainable rubberwood toys from Plan Toys. A café area at the back of the store adds a relaxed and child-friendly vibe.

Zero waste converts
So, what sort of reception has the store been receiving in these first few weeks? Watson again: “It’s been really good so far and our hunch about the mixed demographic in this part of town is proving true. We always felt that being here on the Pantiles was important. There are three elements to our target audience – existing zero waste shoppers in the town, visitors who come in to see what we do and then hopefully become zero waste converts, and tourists. Tourists generally need the most encouragement – but we happily walk everyone through our tare-fill-weigh-label-pay system. Tourists are generally more gift oriented, particularly locally sourced gifts, so we try to meet that demand. On the whole though, Tunbridge Wells is really responsive to the zero waste concept. I think there will always be people who’ll come in, take a look around, and a say ‘we’ll come back’ – and, to be fair, about 50% do!” 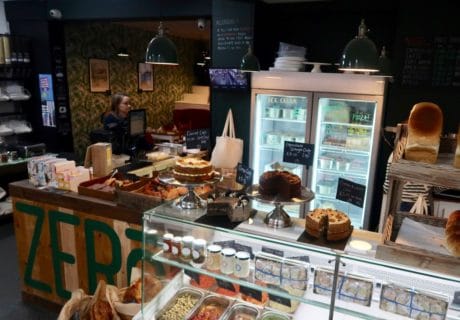 Price points are generally understood by customers. Comments Bowyer: “We might be a bit more expensive on some items, but we come in cheaper than Waitrose and Sainsbury’s on others. An initial obstacle sometimes is the fact that quite a lot of people don’t know what 100g looks like! But they quickly get used to the system, and our weighing and labelling area works really efficiently.”

The store is attracting shoppers of all ages and, interestingly, there is a rough 50:50 split between male and female customers.

Growing movement
Fruit and veg is proving to be the most challenging sell. But to ensure there is no waste here either, The Zero Waste Company has teamed with the Too Good To Go app. At the end of the day customers can buy a ‘Magic Bag’.

Social media is the key marketing channel, says Watson: “It’s giving us really good reach locally – we’ve already got a strong following on Facebook, and we’re active on Instagram and Twitter. Photos are selling the store.”

Bowyer and Watson see their new store as part of a growing zero waste movement. “That’s our real inspiration. Let’s be honest, margins are tight, so this is a real labour of love. The way we look at it, is that this has to work and we’re working incredibly hard – with the help of our great team – to do just that.”