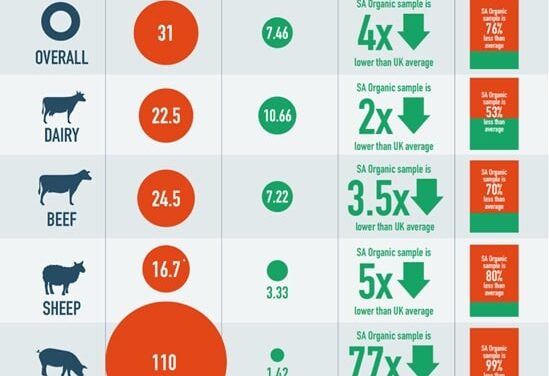 A new report has revealed that organic livestock farmers certified by the Soil Association (SA) have much lower antibiotic use than average levels, achieved primarily through good husbandry.

The report, Antibiotics use in Organic Farming; Lowering Use Through Good Husbandry, commissioned by the Alliance to Save Our Antibiotics shows that overall use per livestock unit by SA-certified organic farmers was four times lower than the national average found in national monitoring of UK livestock farming.

“British farmers have voluntarily cut their antibiotic use by nearly 50% in the last five years, which is very welcome, but these findings show that much lower use could still be achieved,” says Cóilín Nunan of the Alliance. “Organic farming has stricter rules on antibiotics which do not permit routine use or preventative mass medication. If the government is serious about tackling the antibiotic-resistance crisis, it should immediately move to end these practices on all British livestock farms.”

Adds Kate Still of the Soil Association: “This study shows that most Soil Association-certified farmers already have very low antibiotic use because they are implementing organic principles which aim for high animal health and welfare. Organic farmers are showing what is possible when good husbandry and responsible antibiotic use are combined. As we gather more data in years to come, we hope to drive antibiotic use even lower.”

The Alliance is calling for high husbandry standards used in organic farming to be recognized as a solution for reducing antibiotic use and wants to see higher health and welfare standards for all British livestock.