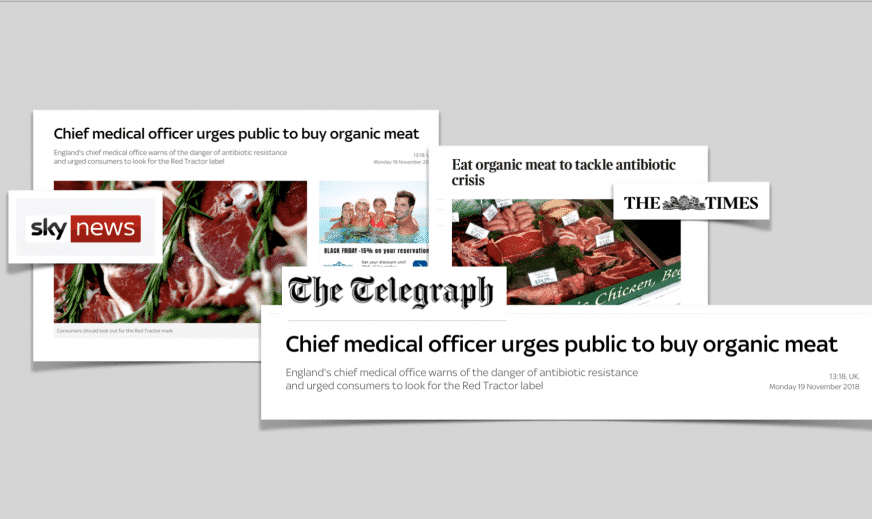 England’s chief medical officer has urged people to eat meat reared under organic or other high-welfare standards to help tackle the growing crisis of antibiotic-resistant superbugs.

Speaking at the World Innovation Summit on Health in Doha this week, Dame Sally Davies warned that the world faced an ‘apocalypse’ if antibiotics failed to work any more. Stressing the importance of individual responsibility in this area, she added that ‘consumers have a terrific amount of influence on behaviours on farms’.

Antibiotics in the UK and Europe are routinely and widely used in conventional farming to prevent infections in animals that are otherwise healthy. While these drugs do not remain in the meat of animals at the point of eating, they pass into the environment through their urine and other kinds of waste, contributing to resistance in humans.

In organic systems, antibiotics can only be used where necessary and under strict conditions.

I want animals that have been reared with good welfare standards and, actually, that means very low antibiotic use

Lead organic body the Soil Association is one of the co-founders of the Save Our Antibiotics Alliance, which is calling for urgent action to ‘save antibiotics for use in unhealthy humans, not healthy animals’. The group is calling on the major retailers to require that their meat and poultry suppliers sign up to strict antibiotics use standards.

Davies says: “I want animals that have been reared with good welfare standards and, actually, that means very low antibiotic use.” She urges shoppers to pressure food firms into cutting antibiotic use by buying produce that was not exposed to drugs, such as organic.

“I am eating less meat, and … I do try to make sure it is at least Red Tractor,” she adds. The UK’s Red Tractor assurance scheme recently tightened up its policy on antibiotic use, requiring that antibiotics are used only as a ‘last resort’ and supported by a vet report.