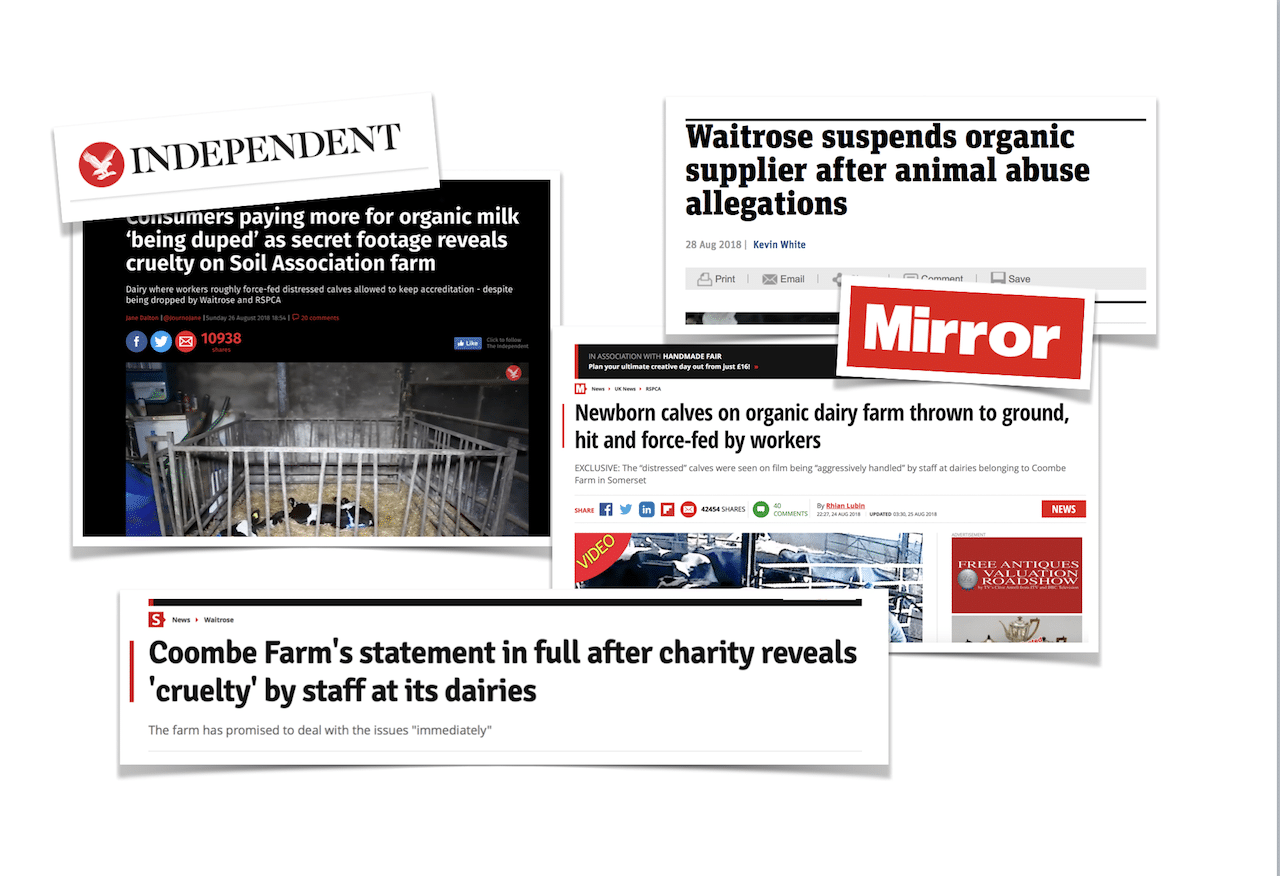 The chief executive of the Soil Association (SA), Helen Browning, says there was ‘no excuse’ for the ‘distressing’ treatment of dairy cows and their calves revealed in video footage of an award-winning organic farm by animal rights group Animal Equality.

The video shows farm staff from Coombe Farm in Somerset forcing new-born calves to the ground and roughly pushing a tube into the animals’ mouths to feed them colostrum. In one clip a worker appears to put his foot on a calf’s head, and in another a worker appears to slap an animal. The video’s narration also claims that calves were separated from their mothers in as little as 12-13 hours.

Following the release of the video to the media (the story and video were featured in reports by The Independent, Daily Mail and Daily Mirror, among others), Waitrose suspended its contract with Coombe Farm, while the RSPCA – which said it was ‘disgusted and shocked’ at the footage – announced it was launching an investigation of conditions at the farm (which currently has RSPCA Freedom Food accreditation).

The SA said it had subsequently carried out an investigation at Coombe Farm and demanded immediate improvements, although it did not suspend organic certification of the farm.

The organic charity’s initially limited response drew criticism from some consumers on social media. Now, Browning has posted a lengthy blog post addressing the Coombe Farm report, and wider aspects of organic dairy farming. She writes: “What I found especially distressing in the Coombe Farm footage was the very rough treatment of the calves while they were being tubed with colostrum. It is vital to ensure that every calf gets a full feed of colostrum in the first six hours of life, and if the calf is weak, it is perfectly acceptable to use a tube to make sure that this vital feed is received.

But staff should never treat calves like this. There is no excuse

Browning adds: “But staff should never treat calves like this. There is no excuse. However busy a farm is at calving, there must be enough people on duty to allow time to encourage calves to suckle naturally, and to tube colostrum correctly if that is really needed.”

While insisting that ‘systematic manhandling [of animals] will not be tolerated’, Browning points out that the Coombe Farm footage showed that all the calves looked ‘strong and well’, while their mothers ‘seemed in good condition too’.  Pens were ‘very clean and well bedded, and in many ways the facilities and animal wellbeing looked exemplary’, she adds.

A dairy, beef and pig farmer herself, Browning also defends early removal of calves from their mothers, while insisting that is the ‘worst thing about dairy farming’. She writes: “In my experience, the longer the calf is with its mother, the harder this gets. Even at nine months of age, when the calf is almost as big as the cow, they hate being separated. To be honest, very early removal, before the maternal bond has been established fully, seems more humane than a week, or three months or a year.”