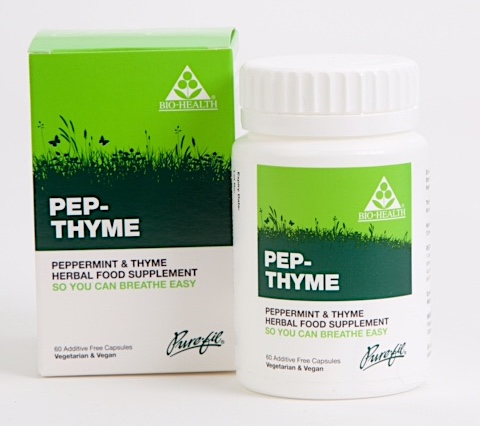 Air pollution is a regular national news story, and a major public health threat. Polluted air can cause allergic reactions such as asthma, as well as problems with congestion in the nose, sinuses, lungs and bronchi – with children and the elderly particularly susceptible.

Pep-Thyme, from Bio-Health, is a new product made from the aromatic herbs peppermint and thyme, both of which contain volatile oils known to aid easy breathing and to help mitigate the negative effects that air pollution has on the human body. The capsules may also be taken apart and used to make a hot drink – inhaling the steam will deliver the volatile components directly through the nasal passages to the lungs and help reduce bronchial and upper respiratory catarrh.

Thyme (thymus vulgaris) is rich in the volatile oils thymol and carvacrol which possess an antimicrobial and antiseptic action. Thyme has traditionally been used by herbalists to treat bronchitis and asthma where its relaxing and antispasmodic action on the lungs and bronchi reduces coughing and wheezing. Its expectorant action increases the production of a more fluid mucus, ensuring a productive cough. Thymol is also believed to stimulate the immune system. According to the medieval herbalist Culpeper, thyme is ‘a noble strengthener of the lungs, …. nor is there a better remedy growing for whooping cough. It purgeth the body of phlegm and is an excellent remedy for shortness of breath….”

Peppermint (mentha piperata) is rich in the volatile oil menthol, which soothes the respiratory tract and is also an effective decongestant and antihistamine.

The two aromatic herbs used in Pep-Thyme are well known and widely used by medical herbalist for their varied therapeutic use. The combination of the two herbs – Peppermint leaf and oil and thyme – are additive free, use vegetarian capsules and can be taken three times daily.