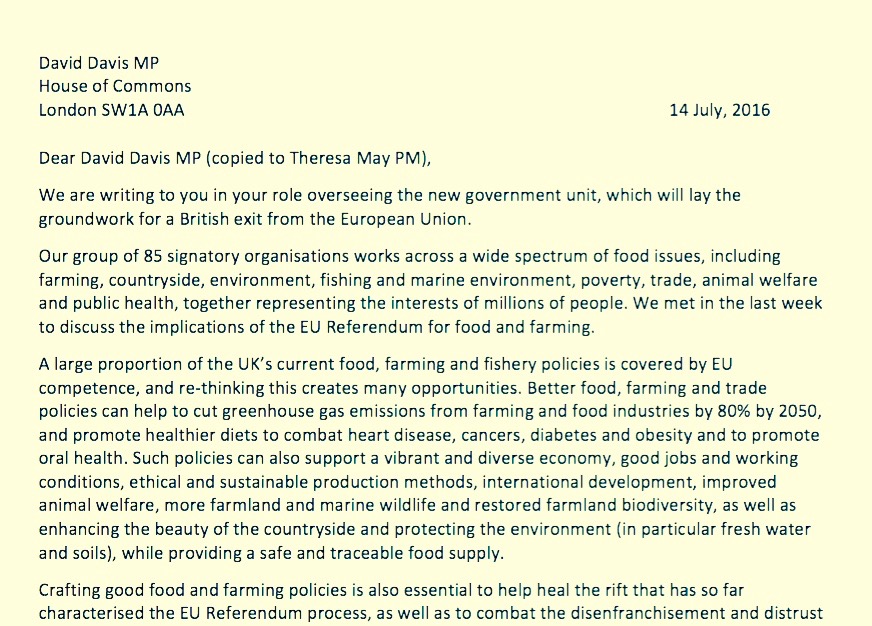 Over 80 organisations have signed a letter to Theresa May and the Brexit minister David Davis to stress the important implications of the EU referendum result on food and farming.

The 80 signatory organisations – the Soil Association, the OTB, Sustain and Traidcraft among them – say that since many of the UK’s food and farming policies and subsidies have been defined at the EU level, the UK government now has an opportunity to reshape these to ensure that taxpayers’ money is spent for public good.

The organisations point out that better food, farming and trade policies can help to cut greenhouse gas emissions from farming and food industries by 80% by 2050, and promote healthier diets to combat heart disease, cancers, diabetes, and obesity, saving the NHS, and ultimately taxpayers millions of pounds. Such policies, they say, can also promote a vibrant and diverse economy, supporting good jobs and working conditions, in the UK and overseas. And they argue that the UK could prioritise ethical and sustainable production methods, improve animal welfare and enhance the beauty of the countryside, while also providing a safe and traceable food supply.

Kath Dalmeny, head of Sustain, who coordinated the letter, said: “The British public has given no mandate for a reduction in food and farming standards, a weakening of protection for nature, nor a reversal of the UK’s commitment to lifting millions of the poorest people in the world out of poverty through trade. We are seriously concerned that such vital considerations may be over-run by a drive for new trade deals at any cost.”

Malcolm Clark, coordinator of the Children’s Food Campaign, said: “Brexit must not mean an end to policies that can reduce the diet-related conditions, such as cancers, diabetes, obesity and heart disease, that threaten to overwhelm the NHS. We have already waited nearly a year for the government’s Childhood Obesity Strategy, yet decisive action is still urgently needed to decrease consumption of junk food. Since the result of the EU Referendum, we have already seen the food and soft drinks industry calling for the sugary drinks tax to be shelved. But the UK’s future outside Europe must not be allowed to result in a rise in diet-related disease.”

Patrick Holden, chief executive of the Sustainable Food Trust, said: “We must do everything we can to ensure standards do not slip. But what we really need is an entirely new vision and model for the future of food and farming. This should be informed by a recognition that we are emerging from a long period of reductionist science and siloed attitudes, in favour of a new world view, characterised by integration and systemic thinking. Most particularly, we need to reintegrate nature and food production, and produce food in a sustainable way that provides the ingredients for healthy diets.”