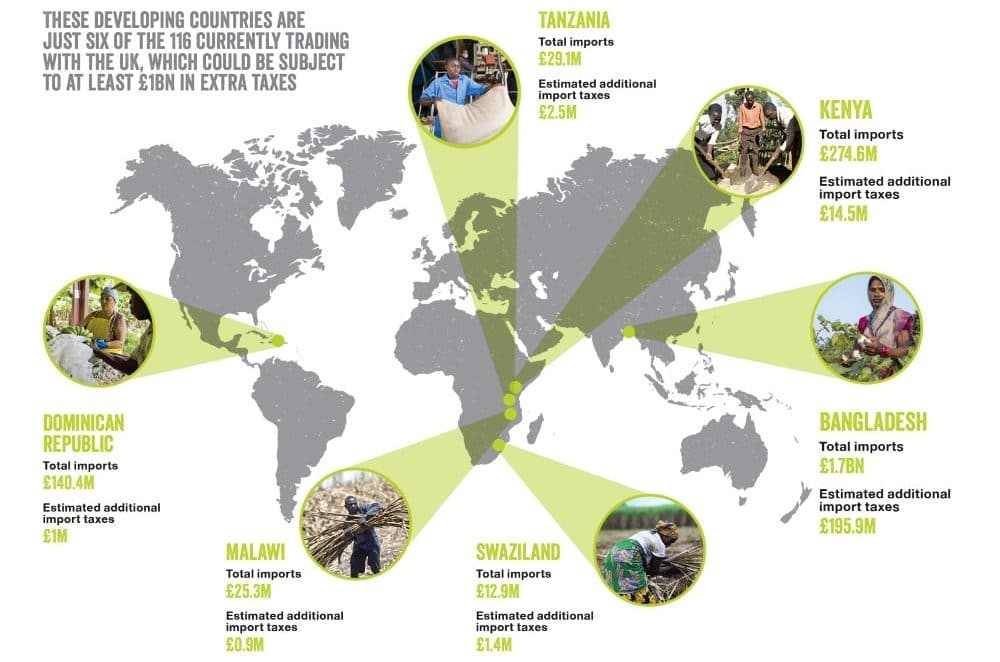 A Fairtrade Foundation and Traidcraft report – Brexit: Let’s change trade for good – warns that Brexit could make or break farmers from some of the poorest countries.

According to the Fairtrade Foundation, EU measures currently mean products the UK imports from the poorest countries are exempt from charges or taxes. But, it says, that if equivalent rules aren’t put in place by the UK Government, 116 countries stand to lose out.

Fairtrade Foundation and Traidcraft are urging the Government to offer the poorest countries preferential, non-reciprocal access to the UK market as part of five recommendations in the report.

“This Government has repeatedly said it wants new trade deals to be fair for all. We need action to match that ambition: if the UK is to become a great, global trading nation we must make sure we change trade for good. We’re calling on the Government to deliver on its promises and make this tumultuous time one of hope and opportunity,” said Fairtrade Foundation’s CEO Michael Gidney.

Robin Roth, CEO of Traidcraft added: “We’ve calculated that new taxes on imports from the world’s poorest countries could amount to around £1 billion if the government fails to act. This could mean rising costs for UK consumers on things like fresh fruit, coffee and garments – or more likely, hit the income and working conditions of already poor and vulnerable producers and workers in developing countries.”

In other related news, a poll has found that nearly a quarter (23%) of adults never think about who produces their food and drink and almost two in ten people (17%) have never thought about whether their food has been produced in exploitative conditions where producers don’t receive a fair deal for what they grow. However, once challenged to consider how purchasing power can count, 70% of people said they want to make sure that their food and drink is not produced in exploitative conditions and three quarters say they would now look for an ethically sourced product

The figures were released by the Fairtrade Foundation to coincide with its 23rd annual Fairtrade Fortnight last month.

“It’s time to really push the direct connection between the food we buy and their impact on farmers’ livelihoods. If people really knew, and thought about it, would they still make the same choices?” says Michael Gidney, CEO of the Fairtrade Foundation.

In a collaboration with advertising agency AMV BBDO, the Fairtrade Foundation has made a new short film – ‘Don’t Feed Exploitation’ – launched during Fairtrade Fortnight.