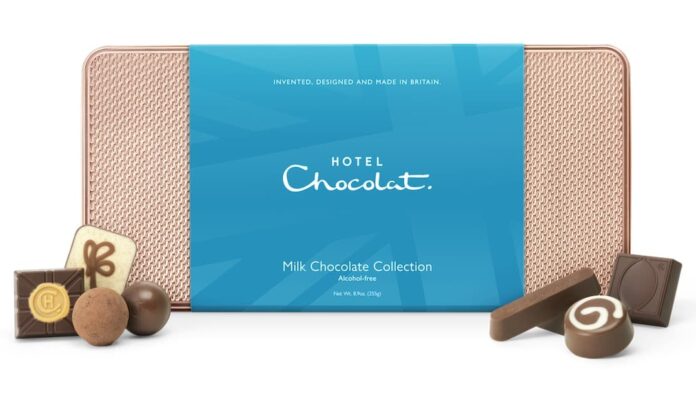 Hotel Chocolat has launched its first ever travel retail exclusive in seven UK airports – Heathrow, Gatwick, Stansted, Manchester, Glasgow & Edinburgh – with a collection of chocolates in premium reusable tins embossed with the outline of Saint Lucia, the Caribbean island home to its cocoa farm.

Biona Organic’s new initiative ‘The Biona Promise’ is designed to show its commitment to three core pillars: reducing, respecting and responding. Its first charity partner for the campaign is Chefs In Schools.

Piccolo has added to its kids’ snacking range with two new products: Mighty Melts made with real yoghurt and Oaty Bars – both are high in fibre, gluten-free and contain no added sugar.

It’s teapigs’ 14th birthday this year and on 29 October it’s holding its eighth Free Tea Day, when over 400 stockists worldwide will be taking part and giving away free tea at their café and delis in over 15 countries

The founder of ACTIPH Water, Jamie Douglas-Hamilton, has been named Food & Drink Entrepreneur of the Year for Scotland and Northern Ireland at the Great British Entrepreneur Awards.

PEP Kitchen, the London-based vegan ready meal business which launched for delivery in 2020, has added a sweet new option to its range with the creation of its bake-at-home vegan chocolate chip cookies.

TREK has added TREK POWER bars to its offer, featuring 15g of plant-based protein and positioned to appeal to consumers with active lifestyles. The vegan bars are available in Peanut Butter Crunch and Millionaire Shortbread.

Lo Bros has launched new Organic Gut Shots in Fiery Ginger and Beet Boost, and a Blueberry Lemonade CBD Kombucha. The products will retail on the functional drinks bay in Sainsbury’s stores nationwide.

Sainsbury’s will now be stocking THIS Isn’t Bacon and THIS Isn’t Chicken Salt & Pepper pieces in 544 of its stores across the UK.

The launch of Kendamil’s new improved baby formula, Kendamil Organic, also marks a new agreement with Boots, which will see the new product stocked by health and beauty retailer, as well as Waitrose and Sainsbury’s.