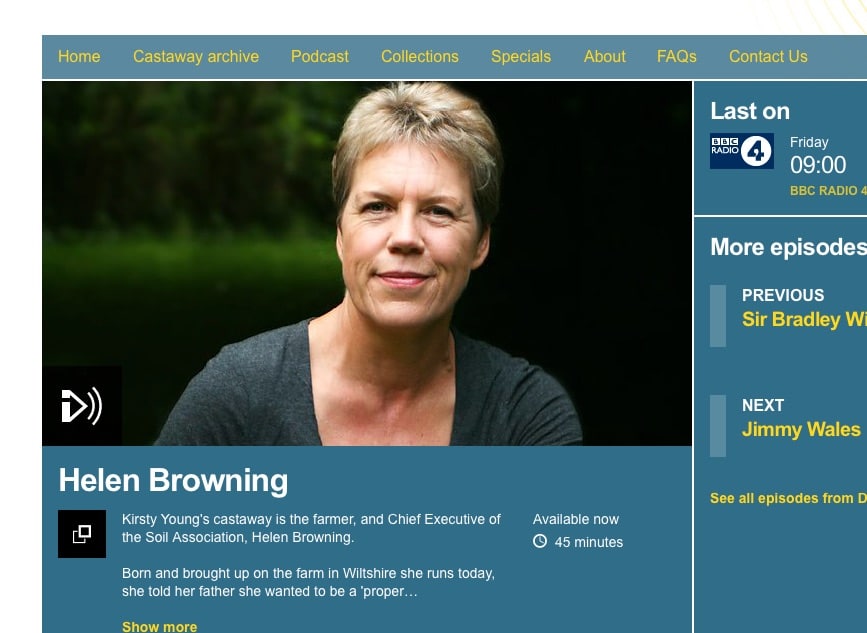 Buying organic is a “great contribution people can make to support farming that’s better for the environment and for animals”, said Soil Association chief exec Helen Browning when she appeared on Desert Island Discs this week.

Asked by presenter Kirsty Young to select “the one thing that best sums up organic farming and the work of the Soil Association”, Browning explained: “Farming is a very disruptive thing to do to the environment and from the time that humanity started farming we’ve we’ve squeezed out nature. The Soil Association’s job, and organic farming’s job, is to make space for nature and to enable wildlife, farm animals and people to thrive while we farm.”

“The Soil Association’s job, and organic farming’s job, is to make space for nature and to enable wildlife, farm animals and people to thrive while we farm”

Asked about the higher pricing for organic, and whether it’s worth it, Browning said: “I understand that when people are squeezed financially they might ask if buying organic is their highest priority. But I think you have an option to support a way of farming that’s much better for the environment and much better for animal welfare – then I think it’s a great contribution people can make.”

Between selecting her eight pieces of music (Buddy Holly, Genesis, Al Stewart and The Beatles were all included) and talking about her formative experience, Browning also stressed the urgent need to protect the world’s soils. “We’ve already degraded about 40 per cent of our soils internationally, and that’s happening here as well. If we don’t take care of our soils, we won’t be able to feed people in 50 years.” She also expressed concern at the “crazy” energy inefficiency of conventional food and farming systems. “You put about 10 or 12 calories in for every calorie of food you get out the other end. That can’t continue,” she said.