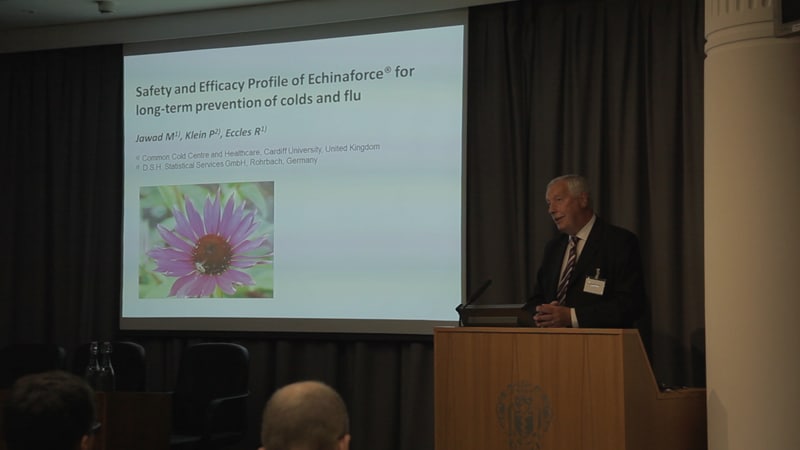 The largest ever prevention trial using Echinacea has shown that an extract of the herb reduced the development of recurrent cold by 59%.

The study also showed that Echinacea cut the need to use pain killers by 52% during cold episodes.

Carried out at the Cardiff Common Cold Centre, the trial ran for a four-month period and saw 755 adults treated with Echinaforce – an extract of Echinacea purpurea. It was the first clinical trial to investigate the safety and efficacy of long-term preventative treatment with Echinacea.

The results of the randomised, double blind, placebo-controlled trial – led by Professor Ronald Eccles – were presented at an International Conference on Echinacea Research in London in September.

The Eccles study involved healthy adults with a history of two or more colds a year. One group of volunteers took Echinaforce and the other were given a placebo tincture identical in looks, taste, flavour and colour. The volunteers took three doses of 0.9ml daily, increasing it to five doses if they experienced cold symptoms.

The trial results showed that:

•  Those not taking the Echinacea were 59% more likely to get a second cold, demonstrating protection against recurrent infections.

•  Of the subjects who caught colds, 52% more in the placebo group had to take painkilling medication that in the Echinacea group.

The London conference, which took place at the Royal Society of Medicine, set out to explore the therapeutic role for Echinacea in building immune resistance and preventing respiratory tract infections such as colds and flu.

Delegates heard that in America alone there are 1 billion colds experienced annually, resulting in 100 million visits to the doctor. Collectively, colds and flu lead to 148 million days of restricted activity at a cost to the US economy of nearly $40 million. Even the common cold can have serious health complications when complications of respiratory tract infections lead to bronchitis, sinusitis and pneumonia. And while vaccination is an effective way to combat infections by the influenza virus, there are currently no pharmacological agents able to protect against other respiratory viruses

One of the topics discussed at the conference was the antiviral activity of Echinacea. From 2009 to 2011 three major scientific articles reported the potency of Echinacea to broadly inhibit a series of respiratory viruses in vitro. Very recent (as yet published) research, carried out by Professor Pleschka from the University of Giessen, has shown that Coronaviruses and Parainfluenza viruses are sensitive to the Echinacea purpurea (Echinaforce) extract, reinforcing the theory that it broadly blocks membranous viruses. Professor Pleschka found that the extract modified the structure of surface receptors of influenza viruses and interfered with the virus replication process, preventing infection.

A presentation from Dr Margaret Ritchie from the University of London looked at the immunological effects of Echinacea. In a study looking at prophylactic (preventative) treatment with Echinaforce, Dr Richie’s team showed that the treatment supports and modulates immune systems, especially during stress.

Summarising the findings of the research presented on the day, Professor Andreas Schapowal said that the combination of immune-modulatory and antiviral effects opened “novel therapeutic possibilities” for the use of Echinacea:

• Long-term prevention throughout the winter season, especially useful in people more susceptible to colds and flu

• short-term prevention during times of increased stress and poor sleep

• Acute treatment at the first signs of symptoms – by blocking inflammation and viral replication at this stage, the development of further cold symptoms can be limited, reducing the need for painkillers, cough medicines and antibiotics.

• Echinacea in today’s world was held at the Royal Society of Medicine, London, on September 27 2012. It was organised by A.Vogel. The conference report can be read here