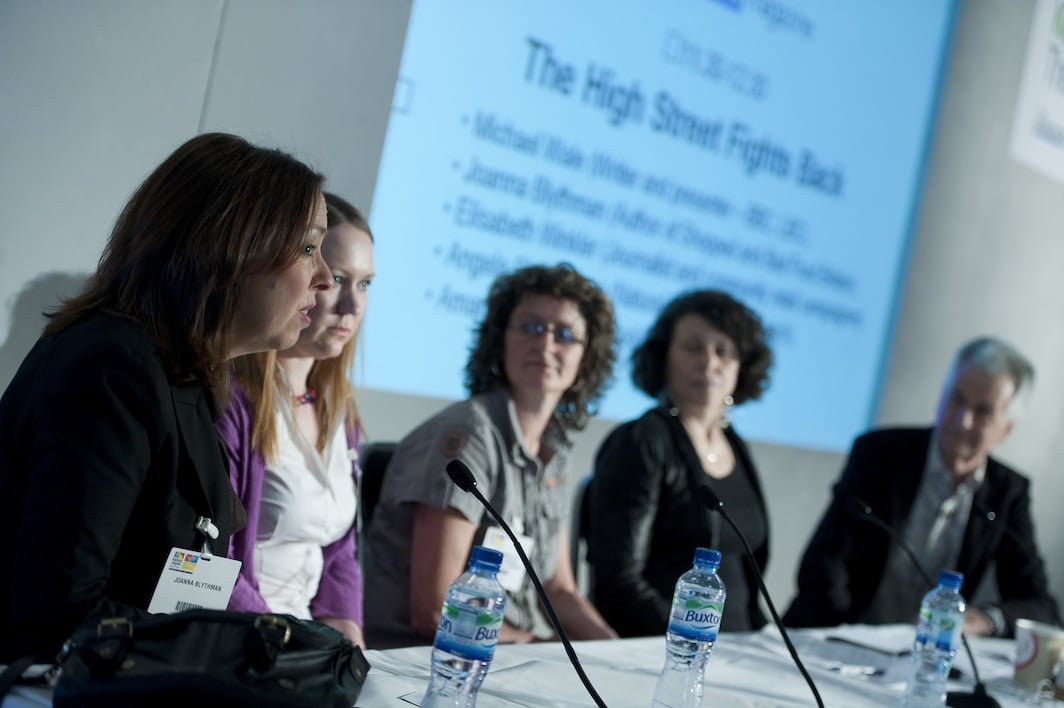 “If you really care, you’re really passionate as an independent shop – then there’s a place you.” Those words, from Norwich-based health food retailer Angela Stephenson, pretty much summed up the feeling at a fired-up discussion at last month’s Natural & Organic Products Europe titled ‘The High Street Fights Back’ (see the video of the session here)

Chaired by broadcaster and writer, Michael Wale, the session brought together a panel of writers, campaigners and retailers to offer their take on the debate on the state of Britain’s high streets – and how they can be reclaimed from the supermarkets.

Guardian columnist and author Joanna Blythman – author of Shopped: The Shocking Power of British Supermarkets – said that Tesco’s disastrous Christmas trading results (30% down) was a sign that the “apparently impregnable supermarket model” was stalling.

Broken trust
She said that consumers had been woken up by the recession to the “big rip-off” that the supermarket chains were foisting on them. “The recession has sharpened the minds of shoppers. They know they’ve been conned and they are now questioning the integrity of the supermarkets.”

Blythman added: “People used to give the big retailers a sort begrudging trust. But when they see someone like Morrison’s announcing that they are no longer going to take measures to stop GM feed getting into their poultry products – which is just them being lazy and saying ‘we can’t be bothered with this’ – that trust gets broken.”

Retailer Angela Stephenson, co-owner of the Natural Food Store in Norwich, said that the shop had celebrated its 30th anniversary just as the recession was taking grip. She told the Olympia audience: “If you had asked us then whether we thought we’d still be there at 35, we would have said, ‘well, we’d like to be, but we really have no idea what the future holds’.”

“But actually, do you know what? We’re doing really, really well. We’re holding our own. And we’ve realised that independent shops really matter. If you really care, you’re really passionate as an independent shop, there’s a place for you.”

Care in the community
Stephenson added that “we’re not just a shop. We’re also a community centre and a first aid tent. We’re 750 sq ft. But we’ll pull up a chair for a little old lady, phone for a taxi for her, and keep her company until it arrives. You won’t get that in Tesco!”

And on the subject of Tesco, publicist and campaigner, Elisabeth Winkler, gave a fast-paced presentation on the ‘the battle for Stokes Croft’ – the No Tesco campaign in the Stokes Croft area of Bristol. It was a compelling story of how every little bit of campaigning helps.

Winkler explained: “Stokes Croft is a vibrant community with its own street gallery, people’s justice centre, and thriving independent retailers. It doesn’t need, or want, a Tesco. But Tesco wants in, and it made an anonymous planning application to avoid be spotted. But it got rumbled by a shop fitter who let the cat out of the bag.”

At that point the 18th Century building that Tesco had secured was promptly squatted by the No Tesco campaigners. Campaigners delivered over 4,000 objections to the City Council (with a reported two in favour). And they conducted a price comparison which demonstrated that Tesco was not cheaper, especially its Tesco Express stores.

In the end the campaigners – and the Council – were hampered by weak planning laws. “Councils can’t discriminate in favour of smaller, independent stores – although Bristol City Council has written to the Government to ask to be able to distinguish between independents and national chains.”

Every little (campaign) helps
But Winkler insisted: “It doesn’t matter if you don’t win – I didn’t ever expect us to stop Tesco. But every campaign waged is worth its weight in gold. It raises awareness of the issues, and you find that people suddenly start to support their local shops more when they realise what’s at stake.”

Amanda Pitt of the Better Food Company in Bristol told us how one of the City’s best-known organic retailers has been successfully squaring up to its supermarket neighbours. But she also showed how it was responding nimbly to the different needs of different customers – in ways that a supermarket couldn’t hope to match.

The Better Food Company, she explained, has two stores – an ‘organic supermarket’ with a café and gift area in the green, but non-affluent St Werburghs in Bristol, established for 10 years; and a small format store in the affluent Clifton area of the city, opened a year and a half ago.

It worked for us
In the short time it is had the Clifton store, another two small supermarkets have opened within half a mile. “The effect was to make us think hard about what we’re offering, how we are offering it and who our customers are. So we stepped back and made some important tweaks. It’s also made us think through how we do things in each of the stores and how we can improve sales and profitability. And it’s working.”

Initially, said Pitt, the Better Food Company was running different offers in different stores to reflect the different types of customers.  She told the retailers in the audience: “St Werburghs is destination store with plenty of car parking, so people will turn up and take away a case of tomatoes on offer. Clifton is more likely to pick up shoppers passing by. So we need to change the window at least monthly to keep catching their attention and pulling people in through the door. And our offers are tailored to that type of customer.”

Summing up, she said: ““We’ve got savvier. And we’re getting results. Both our stores are achieving higher footfall, higher average spend, a reduction in costs and greater profitability”.

“The recession has sharpened the minds of shoppers. They know they’ve been conned and they are now questioning the integrity of the supermarkets”
Joanna Blythman,

“If you really care, you’re really passionate as an independent stop – then there’s a place you”
Angela Stephenson, Natural Food Store, Norwich

“We’ve got savvier. And we’re getting results. Both our stores are achieving higher footfall, higher average spend, a reduction in costs and greater profitability”
Amanda Pitt, The Better Foof Company

“Every campaign waged is worth its weight in gold. You find that people suddenly start to support their local shops more when they realise what’s at stake”
Elisabeth Winkler, Winkler Media

• Watch the video of the session here