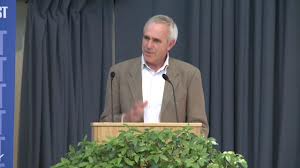 A leading figure in the organic sector says that the food movement must mobilise public opinion more effectively if it is to break through into the mainstream.

The founder of the Sustainable Food Trust (and former Soil Association director), Patrick Holden, says there is a new onus on like-minded organisations in the organic, environment and sustainability movements to “leave their silos and start talking to each other”.

In a talk at a recent event to celebrate the 45th anniversary of Resurgence magazine Holden said that “at less than 5% of farmed land – and diminishing – organic simply hasn’t broken through”.

New approaches were he needed, he said, to bring about the overhaul of global agriculture that was urgently needed in the face of climate change, resource depletion and population growth.

Holden said that it would probably require a series of shocks before people would be galvanised into action. In the end, he added, “only informed public opinion will persuade politicians to act on our behalf.”

But inspiration was needed too, as well as shocks. Holden likened activities at the micro level – individual farms, allotments and window boxes – to building health at the cellular level, which if we all took responsibility for would impact positively on the global food system which could be thought of as a “vast living organism”.

• Watch the talk on NPTV