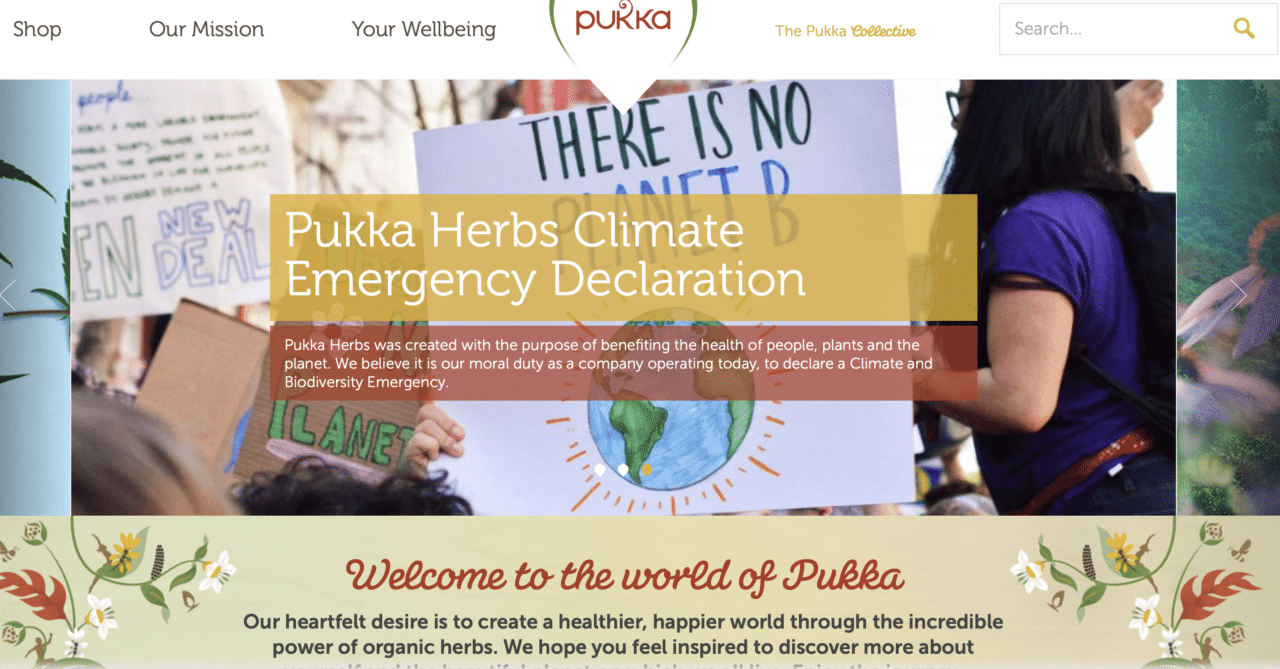 Ethical herbal tea company, Pukka Herbs, has become one of the first UK businesses to declare a climate and biodiversity emergency and has committed to offsetting its entire emissions in 2019.

Pukka says that to declare a climate and biodiversity emergency, businesses must be rethought in the context of a climate crisis, which includes setting a science based carbon-reduction target. Pukka had its ambitious goal to be carbon zero by 2030 validated by the Science Based Target initiative (SBTi) last year.

The company was the first UK business  of its size to set a 1.5C Science Based Target in 2018. Following what calls “sobering research on the state of the planet’s health”, the company has brought forward its commitment to offset emissions from ‘crop to cup’.

As well as advancing its carbon neutral commitment, a set of additional commitments are bound in with the company’s declaration, including:

Pukka Herbs was founded in 2001 with the purpose of benefitting the health of people, plants and the planet. In 2016 – following the last UN Climate Change Conference – the company began mapping its carbon impact from ‘crop to cup’ to identify where it is having the biggest impact, enabling the company to set a science-based carbon reduction target.

Tim Westwell, co-founder, Pukka Herbs says: “When my business partner, Seb, and I co-founded Pukka 18 years ago, the science was already clear that businesses needed to operate in a way that regenerated our environment and society. These are the values that Pukka was built upon; organic farming, fair trade and conservation through commerce.

By declaring a climate and biodiversity emergency, we are committing to telling the truth about the reality of a climate breakdown and making a meaningful commitment to address this collapse by taking radical action and urgently reducing carbon emissions. We acknowledge that fundamental change is required in order to respond to scientific predictions of global warning and call on others to join us on this crusade to protect life on Earth.

“By declaring a climate and biodiversity emergency, we are committing to telling the truth about the reality of a climate breakdown”

We are continuing to progress many programmes that support Pukka’s response to the climate and biodiversity emergency, including regenerative agriculture, using only locally sourced, renewable energy, being a vegetarian company and donating 1% of our turnover to environmental causes annually.”

Pukka’s carbon reduction commitment across its operations was one of many steps forward recognised by BCorp in 2018, which recently awarded Pukka ‘Changemaker for the World’. As a certified BCorp, the company is rigorously assessed on how it delivers its mission in the most ethical and sustainable ways possible. In 2018, Pukka’s score increased by 10 points to 104 out of 200; above the average business score of 50.9.

The declaration came ahead of a crucial time for climate action in September which included the Global Climate Strike, UN International Day of Peace and the UN Climate Action Summit. Pukka Herbs staff joined the Global Climate Strike to reinforce its commitment to the health of people, plants and planet, supporting the voice of young people calling for action from governments and to mark its promise to take significant action against the Climate Crisis. On 21 September the brand recreated an iconic ‘bed-in for peace’ in Covent Garden, London, to advocate living peacefully on the planet. Pukka encouraged visitors to the bed to climb in and write their own ‘peace pledge to the planet’.