Amy and Ruth Anslow, co-founders of Brighton ethical supermarket hiSbe, set off ‘marrowgate’ at the weekend after presenting Jeremy Corbyn with a giant marrow during his visit to the city for the Labour Party Conference. 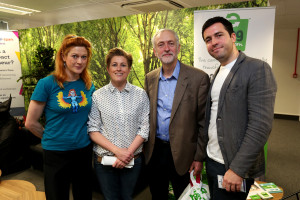 “We’re involved with Entrepreneurial Spark,” explains Amy, “and it chose a handful of the 40 businesses being incubated at the Hatchery to sit down with Jeremy as part of the visit, and we were one of those.”

Before the event Amy searched around the store to find something to give Corbyn as a gift. “I already had a copy of Inspirational Game Changers, a new book which we feature in – alongside Steve Jobs, James Dyson, Richard Branson, all these amazingly inspiring people – so he could read a little bit about hiSbe, but I also wanted to take him something from the shop, something local. One of the guys said maybe you should give him some fruit and veg as he’s a vegetarian. Then someone added give him a marrow! We thought that was hilariously funny so we found the largest marrow we had, put some hiSbe logos on it and carried it up to the hatchery.”

Corbyn’s press people weren’t keen on Amy handing the marrow to him in front of the cameras, however, the new Labour leader had other ideas. “At the end of our chat I gave him the book, pointed at the marrow and said I also have this but have been asked not to hand it to you with the cameras around. He gave me a look and put his hands out to take the marrow, then all the cameras came rushing over and took loads of pictures.

“It was kind of played out that he was baffled by this gift of a marrow or that he’d made some massive PR faux pas, but it wasn’t like that, he knew exactly what he was doing. He knew they were all going to have a bit of a laugh at him and take the mickey as it was his first public event as leader. He didn’t care that this was going to be seen as a bit of a silly move, and he made a comment about it being his David Milliband banana moment. I think he played it very well and made it very funny. Everyone enjoyed it.”

After taking the marrow Corbyn went on to talk about how much he likes them and how he grows them on his allotment. “He even told me how he was going to cook it,” says Amy. “We tweeted loads about it after the event and that was it – within a couple of minutes it was picked up by the Press Association and was on BBC News and in all the papers. This was good for us because we got a mention in almost all of them.”