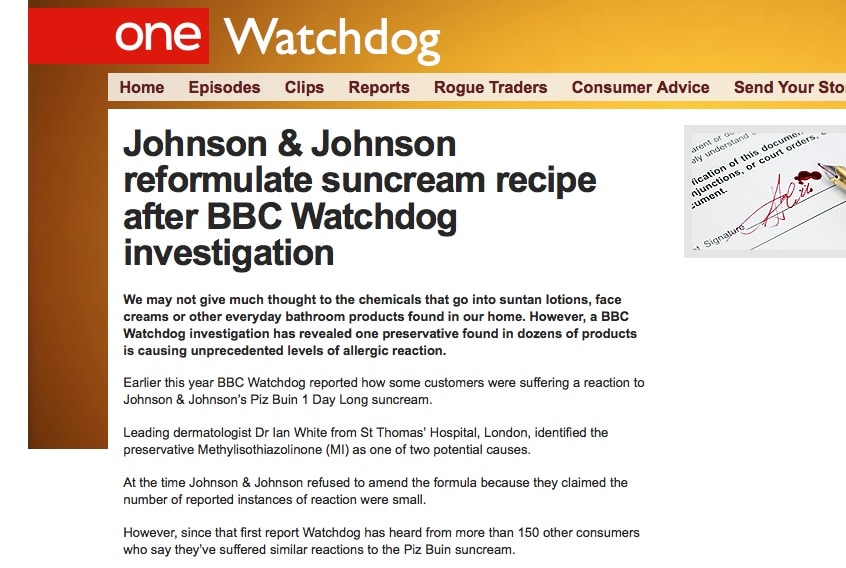 In what can be seen as yet one more reason to switch to natural and organic bodycare products, the chemical preservative methylisothiazolinone (MI) is being removed by several cosmetics companies after it was found to cause severe skin reactions.

A BBC Watchdog investigation earlier this year revealed how people have been experiencing allergic reactions to Piz Buin 1 Day Long suncream, and MI was identified by dermatologist Dr Ian White from St Thomas’ Hospital, as being one of two possible causes. Johnson & Johnson, the manufacturer of the product, initially refused to remove the chemical – which can cause itchy eyes, facial swelling, rashes, blisters and lumps – from the formula, claiming that there had only been a few instances reported.

However, following the report, the BBC programme heard from another 150 viewers who had suffered similar reactions. A Johnson & Johnson spokesperson insisted that the product only contains permitted ingredients at levels within the standards set by EU regulators, adding that many substances we come across in our daily lives cause irritation in some people with a sensitivity. The company said it won’t be recalling the product, however it is currently updating PIZ BUIN 1 Day Long and from 2014 a MI-free formula will be available in the UK.

MI, which is used to extend the shelf life of dozens of bodycare products including shampoos, moisturisers and shower gels.  The preservative has an allergic reaction rate of 10%, compared to the usual rate of 1-2% expected by dermatologists. Watchdog pointed out that the chemical MDBGN was banned by the EC in 2005 when it demonstrated an allergy rate of only 4.5%

A spokesperson for the Cosmetic, Toiletry & Perfumery Association (CTPA) told the BBC that the “Banning or amending the use of an ingredient in a cosmetic product can be complex… Preservatives play an essential role in keeping cosmetics safe for use and there are only a limited number of these that scientists can choose from.” They added: “We will be working alongside dermatologists to discuss what this new data might mean for MI.”

Sarah Brown, founder of organic brand Pai Skincare, commented: “The situation we’re now in with MI highlights just how important it is for consumers to read the ingredients lists on their beauty products, particularly if they have sensitive skin.

“The beauty with a Soil Association-certified product is that the legwork has already been done for you. All ingredients have been independently verified as clean and safe – so if in doubt, look for the kitemark.”