Following a new product survey highlighting the high sugar content of ready-to-drink (RTD) pre-mixed spirits, Action on Sugar is calling on the UK Government to force producers to reformulate.

The campaign group wants the changes to be implemented immediately in order to meet the agreed criterion set by Government in the Soft Drinks Industry Levy, or non-compliers should pay the fine.

The survey by Action on Sugar at Queen Mary University of London, which marks Sugar Awareness Week (20-26 January), looked at 202 drinks and found that some contained as much as eight teaspoons of sugar in 250ml. In addition, nine out of ten pre-mixed spirits had no on-pack sugar information. 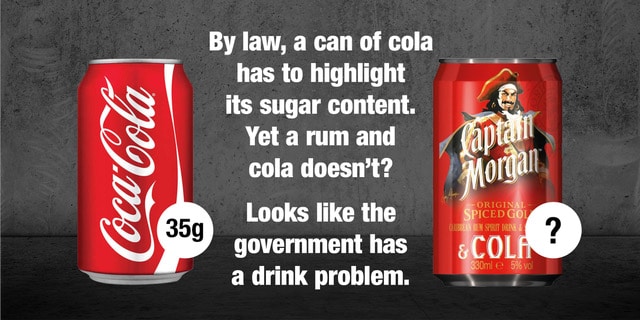 Among the worst offenders found in the survey were WKD Blue (59g or 15 tsps of sugar in 700ml, equivalent to four iced doughnuts), Tesco Strawberry Daiquiri Alcoholic Frozen Sorbet and Archers Schnapps & Lemonade (33g or 8 tsps in 250ml).

The Soft Drinks Industry Levy has been successful in reducing sugar in drinks like lemonade, says the group, yet an RTD vodka and lemonade drink is exempt from the legislation. Action on Sugar says it is urging the Government to prove its commitment to the prevention and reduction of obesity and ill health, by extending the levy to include the alcohol industry.

It is a national scandal that because these drinks contain alcohol, they are not subject to the sugar tax or any form of coherent nutrition labelling

“This is the first time a survey of this kind has been conducted and the results highlight an immediate need for alcoholic drinks to be included in vital public health policies,” says Action on Sugar’s Holly Gabriel. “Customers should be able to purchase better options and reformulating these drinks with less sugar, calories and alcohol is one way to achieve this. Our survey clearly shows that similar drinks can be made with less sugar and calories, yet drink manufacturers are failing to take the appropriate action. Urgent attention is required from the Government to ensure that gaps in the law do not contribute to the rise in obesity and related health conditions, as well as alcohol harm.”

Graham MacGregor, Professor of Cardiovascular Medicine at Queen Mary University of London and chairman of Action on Sugar, adds: “It is a national scandal that because these drinks contain alcohol, they are not subject to the sugar tax or any form of coherent nutrition labelling. The new Government needs to act now by taking control of the alcohol industry and stop them from exploiting vulnerable young adults.”