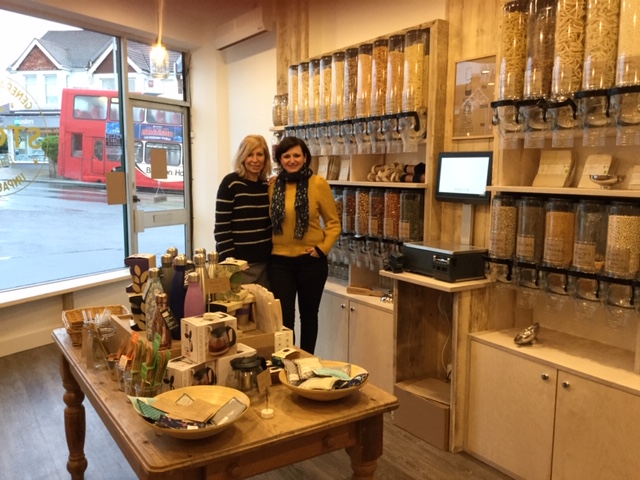 Last weekend a new sustainable shop opened in the Fiveways area of Brighton, to cater for the plastic-free shopping needs of local residents.

Set up by Heather Banks and Ceri Lones, and boasting the first and so far only peanut butter machine in the city, Store Brighton offers a range of dry goods including herbs & spices, nuts, beans and grains, as well as teas, coffee (locally roasted in Ditchling), homecare and bodycare.

Banks and Lones, who both worked at the local Dolphin House Clinic charity, were spurred on to open the store by the growing anti-plastic movement and their own experiences. “Basically, every time I went to the supermarket, my heart just sank because everything is in plastic, and of course 2018 was a massive anti-plastic year – there was a lot of exposure with Blue Planet,” explains Banks.

“Ceri had the idea in May, and it then became a joint project to provide a way for consumers to shop without having to buy everything in plastic. We discovered all these zero waste shops springing up around the country – I went down to Totnes to see Earth Food Love, Ceri went down to Bristol to see the Zero Green shop – and we thought yes, this is exactly what we want to do, a modern take on the old fashioned scoop and weigh. There is a whole industry that has now grown up around this.”

After securing the premises in September 2018, the store opened on 26 January.

“It was like a nightclub in here, it was so busy!” says Banks. “People were full of absolute positivity and enthusiasm, telling us they’re so glad we’re here, that they’d been waiting for something like this. We really feel that we complement the other local food retail shops – we’re like a corner shop, a convenience store, and we want to make a positive contribution to the area.”

The stock is mainly organic, vegan and focuses strongly on local produce. “We’ve got lots of stuff from Infinity, so that ticks most boxes. We wanted to include as many local producers as we could and we’ve found so many who use no plastic wrapping or who are doing refills.” As for affordability, customers are taken aback by the low prices. “Because you’re not paying for the packaging, everything is cheaper,” Banks explains. “People are surprised, asking us ‘are you sure that’s right?’ And it is!”