Britain’s biggest health food retailer has invested £13 million in vocational training across its 700 stores over the past five years. The training is recognised by the Government-backed EDI (Education Development International).

Already, 3,200 Holland & Barrett staff have completed the three-tier, 36-week  scheme – consisting of Induction, Products Advisor (PA) and Advanced Products Advisor (APA) levels. Completion of the final APA stage leads to a Level 3 Qualification Framework (QCF) Award, equivalent to an A level. Each stage requires a score of 85% to achieve a pass.

The scheme – a first on the British high street – has the backing of the employment minister, Chris Grayling MP. At the launch, at the retailer’s flagship Oxford Street store, he said: “Vocational training is a crucial factor in the UK’s economic growth. The launch of this scheme shows a strong lead that other retailers should follow in investing in people and training, to provide a greater service for customers.”

Speaking to Natural Products, Holland & Barrett’s ceo Peter Aldis, said: “This is a proud day for us. We’ve embraced training for many years as a unique point of difference. Now we are finally able to able to shout about it.

“It’s not just something that works for us as a business, it’s also something that boosts the self-esteem and confidence of all our associates. For some, it’s the first formal qualification they will have received – so it’s very valuable for their long-term careers. And I can honestly say, I can’t remember an initiative that has received such a positive response across the whole business.

“The key thing is the accreditation, it’s that which gives the qualification its recognised value. And it’s not an easy thing to achieve. But I think that EDI were impressed with what they saw when they came into the business – at the sheer depth of knowledge of the hundreds of associates they talked to.”

Aldis says the scheme is compulsory for all store and customer-facing staff. Buyers and regulatory affairs staff will also be expected to go on the scheme – as is the ceo (“I think I’m finding it a bit harder than our people who are working in these areas the whole time but, yes, I’m doing it!”).

Aldis believes the new Holland & Barrett scheme is good news for the health food trade generally. It sends out a good message to consumers, he says – one that ought to boost confidence in the category and in the specialist health trade. Although the Natural Health Academy scheme is “proprietary”, he says he is “happy to sit down with any independents who are interested in pursuing it”.

Also on hand at yesterday’s Oxford Street launch was the star of the Holland & Barrett TV ads, Gethin Jones. He said that he was “consistently impressed by the staff in store – it really is just like the adverts!” Susie Harris, manager of the Hatfield branch, added that the new training scheme had provided a “confidence boost for the whole team”. “It’s great to be able to gain a qualification that is recognised, and has real value.”

Peter Aldis said this week’s launch was “just the beginning – it’s something we’re going to shout about and market. And it puts more clear blue water between us and the big multiples.” He also confirmed that Holland & Barrett’s Rewards for Life loyalty card scheme was “on track” to hit its target of three million customers by September, adding that “our big aim is to have 60% of transactions going through on the card”.

• Watch the video by clicking here. 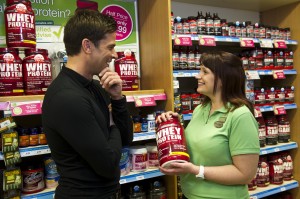