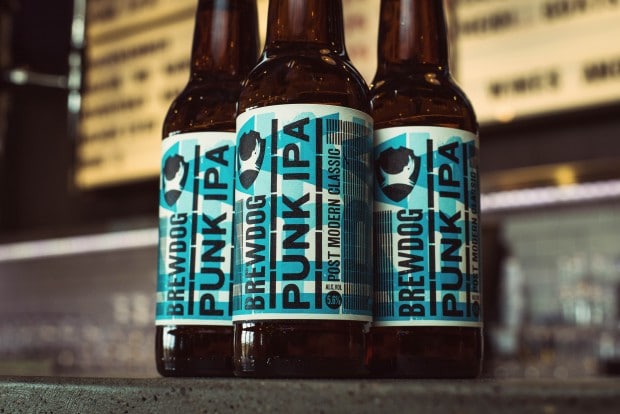 BrewDog has become the latest brewery to embrace veganism by registering 23 of its beers, including flagship brews Punk IPA and Five AM Red, with The Vegan Society’s Vegan Trademark.

BrewDog is one of a growing number of breweries to reject the use of isinglass, the product derived from dried fish bladders historically used in the fining of beer. The irreverent Scottish craft beer brewery, which prides itself on pushing the boundaries in brewing, has in fact never used animal products in any of its beers throughout its nine-year history.

Sarah Warman, head of marketing comments: “Registering our beers with The Vegan Society now, despite them never having animal products in, is part of our bid to make craft beer brewed with passion available as easily possible.

“Everyone should be able to drink great beer, and we’re proud that particular dietary choices won’t keep you out of a BrewDog bar or BottleDog. That’s why we’re also rocking epic gluten-free and alcohol-free beers in our venues – craft beer for the people!”

Jasmijn de Boo, CEO of The Vegan Society, said: “There’s absolutely no need to use isinglass in beer production. It’s an archaic, outdated practice that is being phased out of this industry thanks in part to breweries like BrewDog, who recognise the size of the vegan market.

“The world is getting ever-thirstier for vegan beer. As awareness of isinglass grows with more people realising what it is – fish guts – more people are seeking to avoid it, opting for something vegan-friendly instead. By taking the Vegan Trademark, BrewDog are ahead of the curve, opening up their market to a fast-growing vegan community, and we’re looking forward to many more following their lead,” de Boo added.