Monday 26 February marked the beginning of Fairtrade Fortnight, which launched with a consumer event in London asking the public to ‘come on in’ and end exploitation.

The campaign began on the same day that results of a survey by Censuswide were published, revealing that around half of the British population is unaware of the exploitation that exists within the food chain. The data shows that 45% of respondents felt ethical products were ‘too expensive’ and 30% of consumers ‘never’ think about the people who produce their food.

A giant double doorway, positioned on the capital’s Millennium Footbridge, opened onto images of a banana farm and invited the public to ‘close the door on exploitation and break the stranglehold of poverty prices’. Celebrity chef and food writer Tess Ward lent support by handing out Fairtrade bananas to passers-by and encouraging them to immerse themselves in scenes of a Panamanian farm via a virtual reality film. 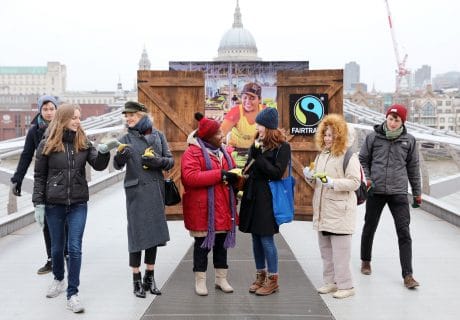 In a statement released on the day of the event, The Fairtrade Foundation called it a ‘scandalous reality’ that in 2018 millions of farmers and workers ‘are still being ripped off’.

Cheryl McGechie, director of public engagement, said: “Most British consumers don’t realise the reality behind the food we eat nor once they make the connection between what they buy and who it was grown by. Although Fairtrade provides a vital safety net that can help lift farmers and workers out of poverty, we need more people to choose Fairtrade, as every item that is sold on Fairtrade terms means more money for the producers who grow some of our favourite foods.”

The foundation also warned that we, as a nation, could ‘all unconsciously be participating in this exploitation’ and said that the launch event and the campaign as a whole has been designed to ‘help people make a direct connection between their shopping choices and the livelihoods of the people who produce our food’. 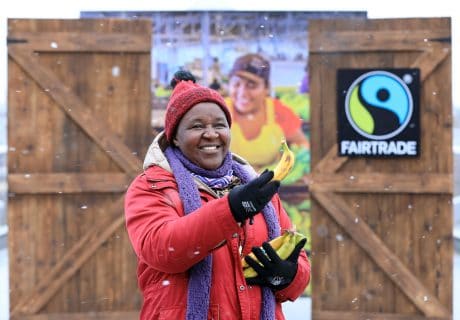 Banana farmer Marcial Quintero, a member of Coobana in Panama, has joined forces with the foundation, along with three other Fairtrade farmers and a handful of celebrity ambassadors, who will each be involved in some 100 events across the UK between 26 February and 11 March.

Retailers wishing to participate in the campaign by sharing their own events, tastings and talks on the shop floor should use the hashtag #FairtradeFortnight.