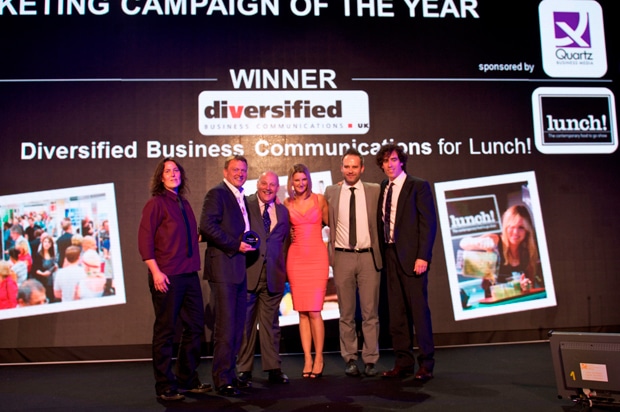 lunch! – organised by Diversified Communications UK – show has won its third consecutive big industry award after its marketing campaign was named the best of the year at the Association of Event Organisers’ 2012 Excellence Awards ceremony in London, on Friday 6 July 2012.

One of the few AEO awards to be open to both trade and consumer organisers, the hotly-contested Best Marketing Campaign of the Year category received a record 25 entry submissions this year, with lunch! just one of seven events to make the final shortlist.  No stranger to victory having previously won the AEO’s Best Trade Show Exhibition (under 2,000msq) Award in both 2010 and 2011, lunch!’s impressive marketing campaign – led by marketing manager Grace Allwright and head of design Roger Denyer – scooped the award ahead of the London Art Fair, Ideal Home Show at Christmas, Labelexpo Europe, Cisco Live Europe, The Energy Event, and The Caravan & Motorhome Show; many of which count their visitor numbers in the tens of thousands

“We are so thrilled to have won Best Marketing Campaign of the Year for lunch!,” comments a delighted Grace Allwright, the show’s marketing manager.  “It is such an honour for the whole Diversified team particularly when you consider the competition within this category!  One of lunch!’s real strengths has always been its niche, boutique appeal, so for it to win against such established – and much bigger – events really is an enormous achievement and a real recognition of the impact that lunch!’s made within the industry in just a few years.  Our thanks must go to our show partners, exhibitors and visitors for their ongoing, fantastic support and helping to make lunch! the wonderful success it is.”