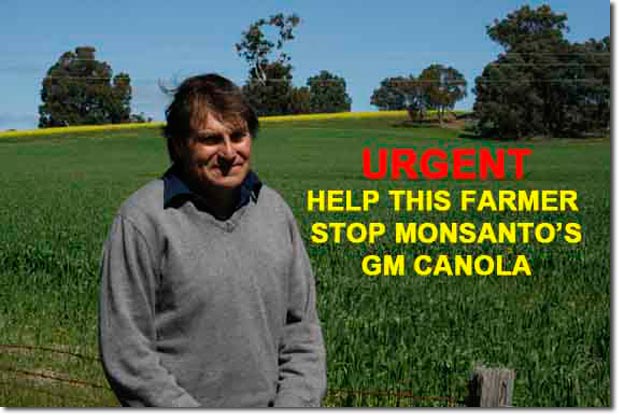 Australian farmer Steve Marsh, who took a neighbouring farmer to court after GM seed contaminated his organic crops, has lost his landmark case.

In 2010 Marsh lost organic status on 70% of his land after Monsanto Roundup Ready canola drifted onto his farm from the land of his former friend Michael Baxter. Marsh was seeking A$85,000 in compensation as well as a permanent injunction to protect his farm from future contamination in what was described by Marsh’s lawyers as “the first court case of its type anywhere in the world”.

However, the Honourable Justice Kenneth Martin, ruled against Marsh in the case which was heard in February by the Supreme Court of Western Australia, saying: “I am not satisfied that in 2010 Mr Baxter breached any (lesser) duty of reasonable care.”

Mark Walter of Slater & Gordon, the lawyer acting for Marsh, commented that the ruling “leaves Australia’s non-genetically-modified food farmers with no legal production against contaminated from nearby properties”.

Organic supporters are concerned about what the outcome of this case will mean to the future of organic farming if GM crop production increases.

“We are very disappointed that Steve Marsh has lost his court case today,” said Emma Hockridge, Soil Association head of policy. “It shows that if GM crops are ever grown in England, home-produced organic farming and food are at risk unless the Government acts to ensure they are protected from contamination by GM crops. Farmers should have the choice to grow non-GM crops without facing the costs of contamination, and without having to take neighbours to court to try and protect their livelihood … This ruling is further evidence that once GM crops are out in the environment they cannot be contained, so they deny farmers and the public that choice.”