The Organic Trade Board (OTB) has today (10 August) announced the launch of its bid for “game changing” EU funding to further extend the successful and pioneering ‘Organic. Naturally Different’ campaign for an additional three years from 2017.

New funding rules announced by the EU mean that a successful bid would see a shift from 50% matched funding of monies raised by industry to 80% – the equivalent of a €4 contribution for every €1 raised by pledgers. This could potentially increase the campaign budget five-fold, giving the organic industry the opportunity to significantly amplify communications direct to consumers, highlighting the important benefits of choosing organic.

As a part of the new funding model, successful bids will include a multi-country execution. The OTB believes this represents a significant opportunity for the organic industry to shift gears and unify communications across Europe.

Led by the UK, in partnership with Denmark and Sweden, the 2017-20 bid has set an ambitious industry funding target of €1.25million per annum and, if successful, the contribution of €5million from the EU would bring the total three year campaign budget to €18million.

“If successful, the contribution of €5million from the EU would bring the total three year campaign budget to €18million”

Paul Moore, OTB chairman, (pictured) comments: “After five years of the ‘Organic. Naturally Different’ campaign, which has resulted in a 4% year-on-year growth of the organic market in 2014, this new funding model has the potential to be a complete game-changer for the industry. With the backing of our European partners, if we are successful with our bid, we will have the chance to significantly increase the size and scope of our campaign – speaking with one voice across key countries in Europe. This is a fantastic opportunity for our industry to really break through more dramatically to consumers, so we are calling on all brands with an interest in organic to back the bid.” 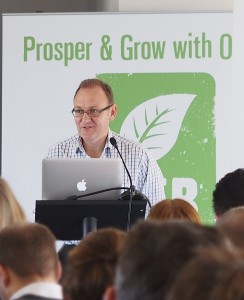 Commenting on their involvement with the bid, Richard Hampton, managing director at OMSCo, said: “As an existing pledger to the ‘Organic. Naturally Different’ campaign, the potential that this new funding model provides is incredibly exciting and we encourage everyone working within the organic food and drink industry to lend their support. Turning up the volume on our campaign will allow us to help further promote the many benefits of organic which, in turn, will help us to both support British farmers and provide quality and value to consumers.”

Paul Moore concluded: “We have seen great success over the last five years both in terms of uplifting sales and shifting shoppers’ perceptions; an achievement that would not have been possible without the backing of our members. This being said, to reach our funding target of €1.25 million, as organic industry leaders we must all now work together to seize this incredible opportunity, encouraging every organic brand and retailer to pledge financial support.”