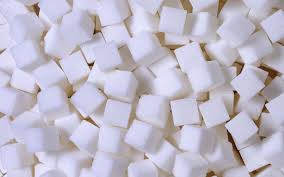 Experts at the World Health Organisation (WHO) are expected to recommend people halve the amount of sugar they consume.

A draft paper agreed by WHO scientists and health experts is calling for the current limit of 10 teaspoons a day of sugar to be cut to five. The aim is that ‘free sugars’ should constitute no more than 5% of total energy intake.

The radical overhauling of guidelines on sugar consumption is partly a response to the international obesity epidemic but it also reflects mounting evidence linking sugar and heart disease.

The WHO document makes a distinction between ‘free sugars’ – those added to foods by the manufacturer, cook, or consumer – and sugar contained in fruit and starch, which are excluded. But sugars naturally present in fruit juices, honey and syrups are included in the guideline limit.

WHO’s draft proposal has been described as “political dynamite” because if it is adopted it would have potentially enormous implications for the food and drink industry.

Commenting on the development leading nutritionist and natural health writer, Patrick Holford, told Natural Products: “Anyone who knows anything about obesity, diabetes, heart disease and Alzheimer’s knows that sugar consumption is a major contributor. There is no ‘need’ for any refined sugar, so the WHO’s recommendation to have no more than 5% of calories from sugar is a very good idea if the goal is to reduce these endemic diseases. The switch away from sucrose to cheaper corn-derived high fructose corn syrup, which more readily converts to fat, is clearly part responsible for the health mess we are now in. We have been fruited – and the only way out is to get tough on sugar. This also means making sugary foods less attractive through taxation and labelling. For example, a food with more than 5% of calories from sugar could be required to say ‘sugar is bad for your health’ much like cigarette packages were forced to do.

“None of this will be commercially popular. Sugar is big business and the last time the WHO tried to limit sugar intake the sugar industry in the US got the government to threaten withholding funding top the WHO. But the tides are turning because governments can’t afford soaring health care costs. Nor will these kind of policies be publicly popular because sugar, like cigarettes, is addictive.”

“Sugar is big business and the last time the WHO tried to limit sugar intake the sugar industry in the US got the government to threaten withholding funding top the WHO. But the tides are turning”

A single can of cola contains around ten teaspoons of sugar, a Mars bar has five and a bowl of Coco Pops around four. But it’s not just mainstream brands coming under scrutiny, some specialist natural products – mainly juices and natural energy drinks – have recently being singled out for their high sugar content.