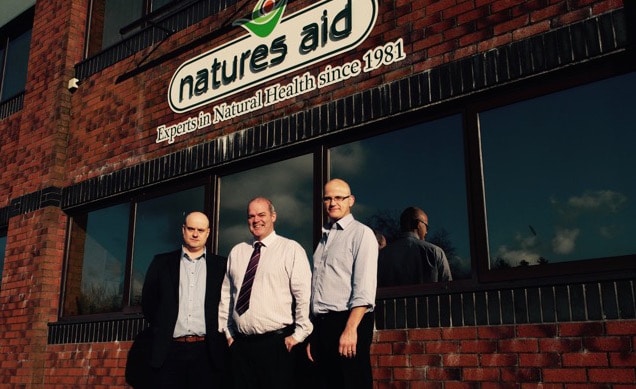 Agile, innovative and with UK and export sales growing strongly, Natures Aid is powering ahead from its Lancashire base

‘Made in the UK’ announces the Natures Aid website, the Union Flag fluttering above the slogan to emphasize the point.

“It’s such an important factor,” says director of commerce, Chris Morrey. “It’s not just the fact that we manufacture our products ourselves – with all the control over quality and sourcing that gives us – but that we make the products here in Kirkham, Preston – in Britain. It’s a deal-maker sometimes when we’re exhibiting at overseas events. A potential customer will ask: ‘So where do you have the products made, in America?’. There’s almost a look of disbelief when you tell them: ‘No, we manufacture them ourselves’. It’s an instant confidence builder.”

Extra agility
Having its own purpose-built manufacturing facility and state-of-the-art labs also gives Natures Aid some extra agility in the marketplace, says director of technical sales, Tim Gaunt. “We can respond really quickly to new developments in nutritional science or the sudden interest in a particular ingredient or nutrient – and we can get a product from conception to market in a few weeks.”

That market responsiveness, the ability to give retailers the products their customers are asking for, has helped propel the Kirkham-based company firmly into the top tier of UK supplement producers (it currently occupies the No 2 slot in the ‘most mentioned’ VMS brands in NPN’s How’s
Business feature).

“We’ve doubled the size of the business in the last four years and we’ve just had the busiest six months we’ve ever had,” says Gaunt. He describes the past 12 to 18 months as a “pivotal point” in the Natures Aid story. “A series of initiatives have come together, and collectively they are transforming the business,” he says.

One of those initiatives has been a top-to-bottom rebrand of the 180-plus products the company produces. “The rebrand — which we started around two years ago – has been a key driver of the growth we’re seeing now. It’s changed the whole perception of Natures Aid. The previous packs, and the white pots in particular, didn’t reflect the high quality of the products that the company has always manufactured. The redesign has turned that image completely around.”

But sales growth has also been spurred on by the addition of some innovative new ranges – among them the Organic Superfoods range, the children’s Mini Drops products and the high-end boxed ‘specials’ – along with a number of reformulations. This means that the top-seller list of 2016 “bears almost no resemblance to the one of just four years ago”. A few years ago fish oils and glucosamine dominated – they are now a much smaller percentage of our overall sales because almost all the recent growth has come through innovation. 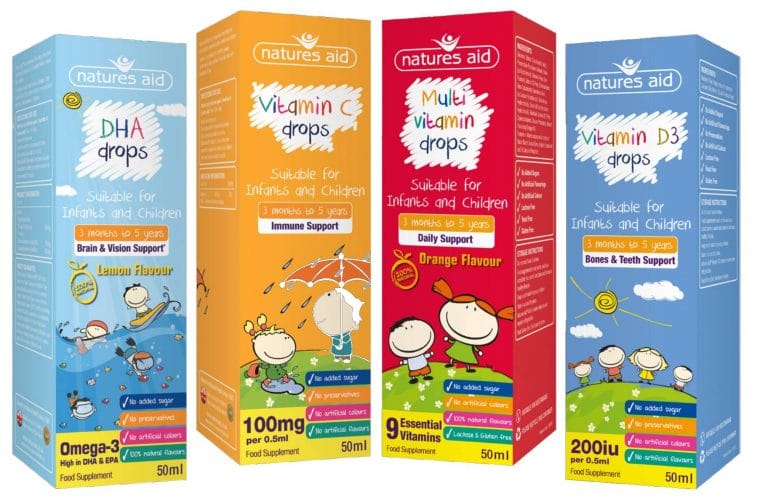 “We’ve won a string of innovation awards at exactly the time when you hear that creative NPD is being stifled,” says Gaunt. “We have an attitude now that if something is new or has been granted novel food status, we want to be first in. We were first with a liquid coconut oil. Our sugar-free Mini Drops range for children has been right on trend and picked up by influential bloggers. And our Organic Superfoods range taps into the huge interest in organic, food-sourced nutrients”.

Combination products
The company sees the food-meets-supplements area as an exciting opportunity. Gaunt again: “If you look at what’s out there, generally you have food, supplements, and in the middle superfoods – increasingly delivered in nutrient-rich powders. In future I think we’ll see more combination products – micronutrients plus superfoods. Watch this space! You’re also seeing a whole change in the way nutrition is seen. It’s built into lifestyles much more. So people will take their supergreens shake to the gym or even the office. There’s almost a competitive element – what’s yours got in it?”

Natures Aid’s THR range has also been coming into its own. “With THRs people are buying a solution,” explains Morrey. “We’re able to use clear, understandable claims on pack – and product names that reinforce that message, JointEeze, SleepEezy, and so on. But we also kept the traditional botanical name on the packs because well-informed customers will be familiar with it and we don’t want to alienate the traditional audience while we build new audiences for herbal medicines.”

The rebrand has also helped the brand establish itself more strongly in London. “It’s where traditionally we’ve had the lowest penetration. Historically, the products didn’t match the particular type of demand. The new ranges – especially the Organic Superfoods range and the premium boxed products – have definitely opened doors. We’re now in some key London stores.”

Export champion
Exports have also been a real success story. Comments Morrey (recently appointed a regional export champion by UKTI North West): “Five years ago exports were a very small part of the business. Now they represent a very significant percentage of our sales, and they are growing strongly. They’ve also been having a big impact on the business and how we manufacture. We’ve had to invest significantly in the facility here to be able to meet the volumes.

We spent heavily on equipment in the last few years – with the latest investment going on a brand new line that’s just been commissioned. But the owners have always reinvested in the business – a very significant sum went into the business to keep valuable herbal medicines on the market.”

David Sole, Natures Aid’s director of operations, says he is pleased with how this latest investment has enabled the business to scale up production at the Kirkham site. Even so, demand for some products – for example the Organic Superfoods range – has been so high that it’s been a challenge to keep up with it at times. “But it’s a great problem to have,” he says. “We’re spurred on by the enthusiasm for the products from customers.”

The company believes that with the natural health sector bouncing back after the recession, it is well placed to achieve further ambitious growth. Gaunt again: “We’d like to see Natures Aid grow a further 50% in the next four years. We just need to keep the innovation coming. We launched 24 new products last year – and it’ll be around the same again 2016.

“Natural & Organic Products at ExCeL will be a massive platform for new products. Retailers can expect more surprises than ever. And we think we’ll be getting quite a few ‘What is this?’ reactions on the stand! It’s a really exciting time for the business.”

This year Natures Aid is celebrating its 35th anniversary. The company was formed in 1981 by Lynn Lord, Dave Lord and Paul Marshall after the herbal company that they all worked for went into liquidation.

The trio combined their different skills and talents to start a company that could supply the demand for herbal and natural products that they could see existed from their previous employment.

Operating from a purpose built 43,000sqft manufacturing facility, with Good Manufacturing Practice and Pharmaceutical Licence (MHRA) accreditation, Natures Aid was the first company in the UK to achieve Traditional Herbal Registration (THR), which managing director Lynn Lord believes was the biggest challenge the company has faced to date.

Recently, the owners and directors of Natures Aid announced their semi-retirement from the company after 35 years and appointed three experienced senior managers as directors to run the business day- to-day.

How The Vegan Society volunteer scheme thrived during COVID