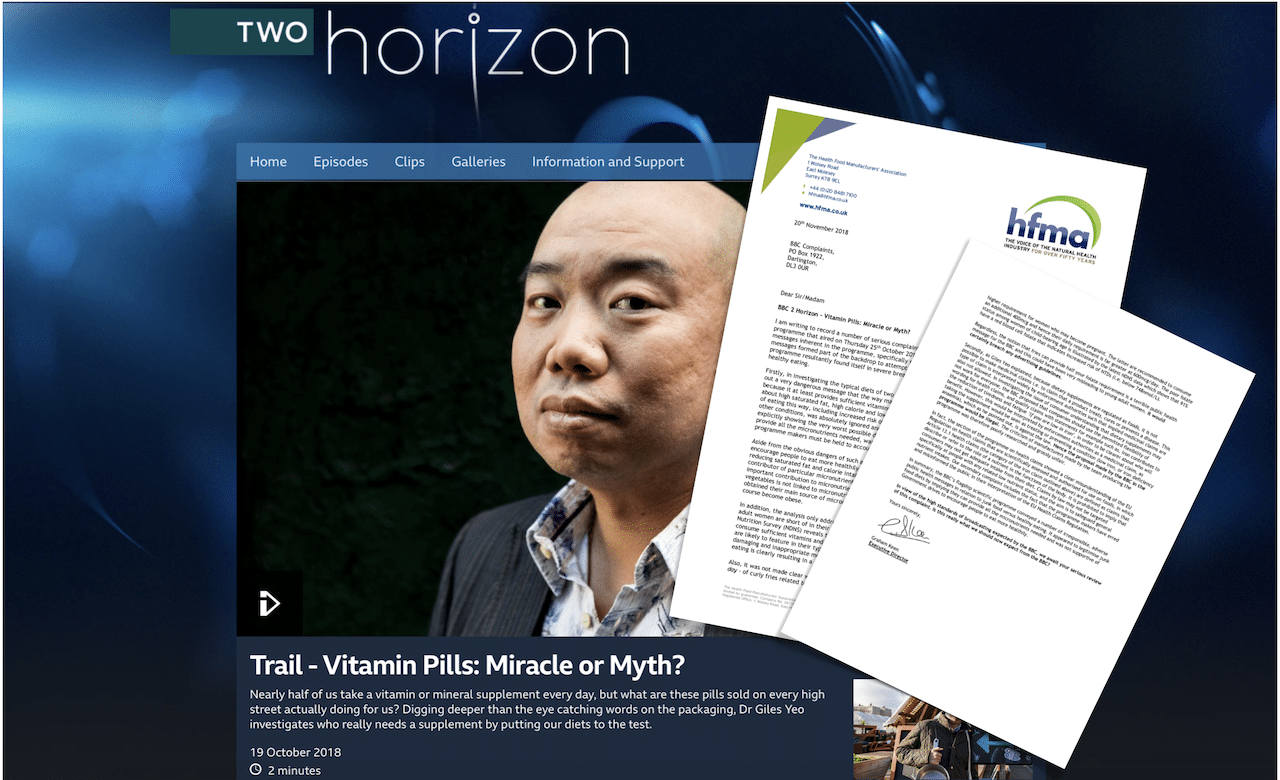 The Health Food Manufacturers Association (HFMA) has written a formal letter of complaint to the BBC about a controversial BBC2 Horizon programme about the food supplements industry.

In its letter, the HFMA says that the Horizon programme ‘conveyed a number of irresponsible, adverse public health messages’ and ‘appeared to legitimize junk food diets by implying they can provide all the micronutrients needed..

The HFMA also argues that the programme relied on selective evidence, and showed ‘a clear misunderstanding’ of the regulatory regime for supplements, particularly EU regulations on health claims.

The programme – Vitamin pills: Miracle of myth? – levelled a series of criticisms and allegations at the industry and its products. The programme-makers argued that:

But the HFMA says that the programme used highly dubious examples to press home some of its points, for example when it stated that curly fries, pizza and curries would contribute towards a person achieving daily requirements of key micronutrients. HFMA executive director, Graham Keen, says of this: “Though a few quick caveats were made about saturated fat, high calorie and low fibre intakes from such diets, the huge potential harms of eating this way, including increased risk of obesity, type 2 diabetes and heart disease amongst other conditions, was absolutely ignored and passed over. Legitimizing junk food diets in this way, by explicitly showing the very worst possible diet of curly fries, pizza and curries, and implying they can provide all the micronutrients needed, was a shocking position for the BBC to adopt and the programme makers must be held to account for such an irresponsible approach.”

Keen also gives examples of where the programme-makers’ suggested solutions would lead to manufacturers breaking the law. He writes: “In investigating the issue of consumer understanding that dietary supplements may not work for everyone, the BBC proposed that companies should use the permitted flexibility of wording for health claims, and qualify claims with statements … such as iron contributes to the reduction of tiredness and fatigue ‘if you are low in iron’, in order to be clearer about who will benefit. However, this would be interpreted by enforcement authorities as a medicinal claim, as taking the supplement would be seen as treating or preventing a condition (low iron, or iron deficiency anaemia), which as he pointed out, is against the law.”

Keen adds: “The criticism of manufacturers made by the team producing the programme was therefore poorly researched and grossly unfair.”