The natural products industry is helping to build a more sustainable future by lifting the lid on health and environment issues and getting people to ask more questions, says the Dragon’s Den star and businesswoman Deborah Meaden. But in this special interview with NPN she also warns the sector against appealing only to an elite few, arguing that “everyone should be able to choose to do the right thing”.

Deborah Meaden was the star draw at this year’s Natural & Organic Products Europe, where she presented the 2016 Natural & Organic Awards – and gave her support for Good Bubble, the natural children’s toiletries brand she invested in when its founder bravely took her superfruit bath time products into the Den.

She also scheduled time for an interview with Natural Products News, which provided us with an opportunity to find out what makes the ‘Green Dragon’ tick.

NPN: You famously sent Good Bubble’s founder Amy Wordsworth into a bit of a spin on Dragon’s Den when you suggested to her that she didn’t actually have a business. At what point did you decided to invest, and was that decision based more on the business idea, or the person standing in front of you?

DM: You can get some pretty early start-ups on Dragon’s Den, so when I said she didn’t have a business I actually said it very respectfully – and it also doesn’t mean to say there isn’t going to be a business.

What really excites me is when somebody has spotted something and they say ‘actually, I’m just going to go for it’. I liked Amy and I liked her background – her family’s long business experience in soap manufacturing. There was a lot of knowledge there, so if anybody was going to develop something it was going to be Amy. But it’s fair to say that if it hadn’t been led by Amy I might not have gone over the line.

Yes, she had a wobble and nearly fainted and I thought ‘what have I done to her!’. But what I also saw was a very quick recovery and underlying steeliness – she clearly really believed in the product.

NPN: Amy’s route into the natural products sector is a very different story to many we hear about. How important was the family background in manufacturing?

DM: It certainly helped but if it hadn’t had been there it wouldn’t have necessarily have stopped me. The truth is I can pretty much find anyone to make things. But I think it gave authenticity to Amy’s pitch. And when she was talking I thought that she really understood what it would take. Because there are some people who think they want to do something but when they get there they think ‘oh, this is all so hard’.

NPN: Where would you like to see Good Bubble in five or ten year’s time – in terms of the size of the brand, the range and retail channels?

“And that’s what’s going on in this industry. You’re taking the lid off important issues with your products and saying ‘we’re pure’. That makes people think, ‘shouldn’t the rest of the products and manufacturers be like this too?”

DM: I like to see all businesses start off in their core range. That’s the space they should be starting in. But as it becomes more mainstream you’re probably going to start talking to the big guys. We have our own plan when it’s the right time. I would very much like to see this as an extended range, available across the high street. Because why not. Being good to your skin shouldn’t be a realm for the wealthy.

NPN: Among the Dragons you’ve shown a natural interest in businesses that incorporate environmental or social benefits. Do you find that these are ever at odds with the usual commercial imperatives of running a successful business?

DM: No. They’re absolutely not at odds. I used to get terrible flack from the Dragons. Ten years ago sustainability issues weren’t so mainstream. I was the slightly nutty green one. Every time someone brought something slightly environmental in they’d say, ‘Deborah might get it but I don’t’. But in ten years things have really changed. And I’m standing here saying, ‘well, I knew they were going to’.

I remember when I was on Strictly a few years ago and just being staggered at the amount of fake tan and thinking, that just cannot be good for you. That was still really forefront when Amy came into the Den. I thought, okay, brilliant, that’s the way it’s going.

And that’s what’s going on in this industry. You’re taking the lid off important issues and saying ‘we’re pure’. That makes people think, ‘shouldn’t the rest of the products and manufacturers be like this too?’.

NPN: You’ve said that Amy, and Good Bubble, are ahead of the game – “a game that in my opinion that will rapidly change”. What did you mean by that?

DB: I think that people want to know more. They’re saying ‘what have you got in your product that I shouldn’t be using?’ So I’m not talking just about the greening of products. I’m saying that people have got to start behaving in a sustainable fashion. And, actually, that’s just commonsense.

NPN: What do you think of what you’ve seen of the brands and products here at Natural & Organic Products Europe?

I haven’t looked around the show properly yet – but as soon as I’ve done my seminar with Amy I will. But I will say something, which is that at the moment it all looks a bit elite. And I think the sector needs to attack that – and that’s one of the reasons I like Good Bubble. It needs to become less elite. Everybody should be able to do the right thing.

NPN: Do you think pricing is currently an obstacle to entry for natural and organic for a lot of people?

DM: Well, two things. First it looks very upmarket, ever so lovely. It also looks expensive, and I do think that needs addressing. It shouldn’t cost more money to do the right thing. Good Bubble isn’t cheap but it is accessible. I’d say it’s the right price.

NPN: Some of the ingredients in Good Bubble are certified – by Ecocert, for example. Do you think certification is important, and a route you will go down?

“The (certifier) symbols and logos make people ask questions – not just of your product, but other people’s products”

DM: I do think certification is important. We don’t exist in some kind of utopia where you shouldn’t need to get certified because that’s the norm, how everybody is. So the symbols and certifier logos make people ask questions – not just of your product but other people’s products. So, consumers will see that these people say they’re cruelty-free – Good Bubble recently signed up to the leaping bunny scheme from Cruelty Free International – and then they start asking questions about the wider market. So these schemes are really valuable because they drive the market to ask questions. And the more questions consumers ask the better we get.

It was during the Episode 6, Series 13 of Dragon’s Den, that Amy Wordsworth first came to national attention. And it looked for a few moments like it might be for all the wrong reasons. 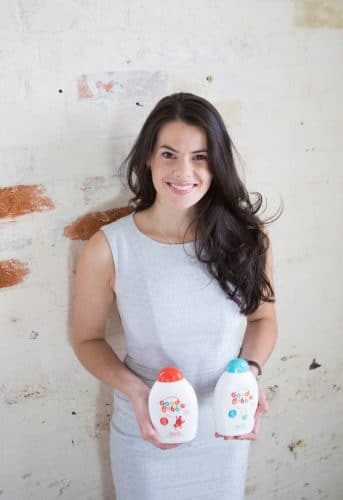 Wordsworth was in the Den to present her new superfruit inspired children’s bath time range Good Bubble. After she’d completed her pitch she immediately found herself on the end of some tough questioning from Deborah Meaden. It culminated in the ‘Green Dragon’ pointing out “I’m not being funny Amy, but you have basically not got a business at the moment”. The pressure cooker atmosphere of the Den seemed to be taking its toll and Wordsworth nearly fainted. But she recovered quickly and soon was back answering questions with confidence – and, crucially, showing that she knew what she was talking about. Deborah Meaden was clearly impressed and decided to invest.

So, was there a point during the interrogation by the Dragons that she regretted applying to go on the show? “Not really. It was a bit of a rollercoaster in the Den as my nerves got the better of me at one point, but I’m pleased I persevered. Deborah really seems to ‘get’ my vision for the brand and I’m excited about this next chapter of the Good Bubble journey.”

Wordsworth is the first to acknowledge the vital role that her parents played in helping get the brand up and running. “My parents and their company Wordsworth (UK) Ltd had the experience that helped me to create a product that is based on natural ingredients but that also performs well.”

Superfruits are the standout ingredients of Good Bubble’s range of bubble baths, shampoos and conditioners, with Dragon Fruit and Cloudberry playing the starring roles. So, why these particular superfruits? “They’ve both got really interesting back stories that I thought could be brought to life through the characters we use across the branding – for example, dragon fruit is also known as the Cinderella plant. Cloudberry meanwhile is packed with vitamin C and is a traditional cure for scurvy.” 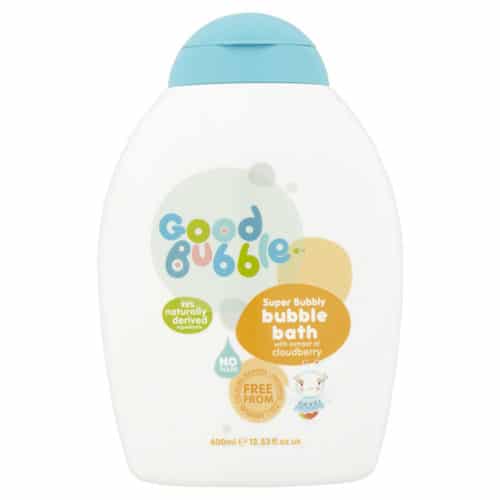 From the outset, says Wordsworth, the Good Bubble brand has been underpinned by a clear set of values. “It’s our mission to make happier, safer bath time products. We are all about caring for the planet and rejecting nasties  but also being good value.”

Price points – £3.69- 3.99 – are intended to make the range accessible, says Wordsworth. “There are quite a few premium natural brands but little that is accessible to ordinary families and mums and dads who care abut what they’re putting on their children’s skin.”