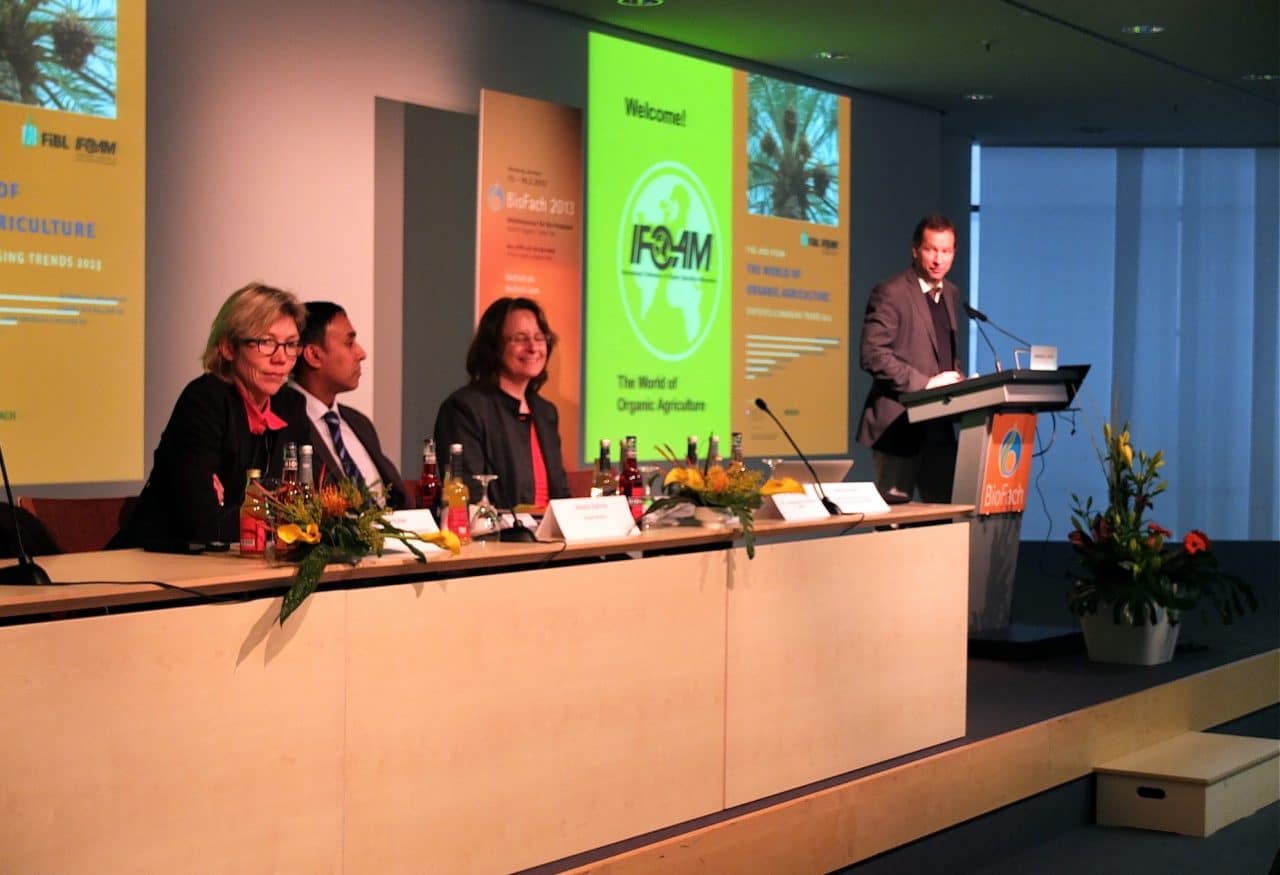 With the organic market worth $62.9 billion worldwide and producers straddling 162 countries, there has never been a greater need for a “common understanding” on organic food and farming.

Huber was one of several leading experts discussing latest statistics and trends in the global organic industry brought together in the 2013 edition of The World of Organic Agriculture.

Key findings of the 300-page document – published jointly by FiBL and IFOAM – were presented by one of its co-authors, Helga Willer. These showed that:

• the organic market is now worth $62.9 billion globally
• 162 countries now produce data on organic agriculture
• 88 Countries have organic legislation
• In 10 countries more than 10% of farmland is organic

Willer showed that Australia has by far the largest area of organic farmland – at 12 million hectares. Argentina is second with 3.8 million hectares, and the US and China come in at 1.9 million hectares. While globally, the total amount of land under organic agriculture has remained static in 2010-11, in Europe it increased 6.3%

Moving on to retail sales Huber showed how two regions of the world dominate the organic food and products market – the US and EU accounting for 44% and 41% respectively of total retail sales.

Huber noted that “the countries with the largest organic market share are those with mutual recognition arrangements”. She said that mutual recognition agreements – such as that agreed between the US and EU last year – were to be broadly welcomed but warned were some problems in the details.

Concerns over the US-EU agreement included variances for additives and aids in baby foods and the issue of fortification with vitamins and minerals – the latter something both allowed and actively encouraged in the US but prohibited under EU Organic rules. This meant that consumer expectations were different in the EU and US and that “changes in the US National Organic Program (NOP) might threaten consumer trust in Europe”.

Against this backdrop, Huber said there was “a greater need than ever for a common understanding on organic – through Codex or the IFOAM stadard”.

Looking at future prospects for the global organic market Amarjit Sahota of London-based analysts Organic Monitor contrasted the sluggish growth forecast for Europe with the healthy growth being seen in the US. The economic problems of southern Europe, he said, were having a knock on effect in Germany and France – hitting the organic market as part of the wider economy.

Sahota highlighted current supply-demand imbalances and the strong market concentration in North America and Europe – “demand needs to be more broadly spread” – as two of the biggest challenges facing the industry. He also agreed that the question of standards needed to be addressed – “we have the EU/US trade agreement, yet what about other regions”.

Sahota also pointed to the increasing competition organic faces from other eco-labels. He said: “Organic is the dominant ethical label in the world, but others are proliferating. The biggest competition is from Fairtrade, although it’s important to note a third of all Fairtrade products are organic.” And he noted that “in the US the fastest growing eco label is not organic, but ‘non-GMO’”.

Sahota finally questioned whether official statistics on organic created a false picture of organic agriculture’s ability to feed the world. In Asia, for example, organic has a market share of just 1%. But he said that since poorer countries were those least likely to be able to afford both chemical inputs and organic inspection costs, the true percentage of organic production was potentially much higher

• Order The World of Organic Agriculture 2013 edition for €50 by visiting www.organic-world.net