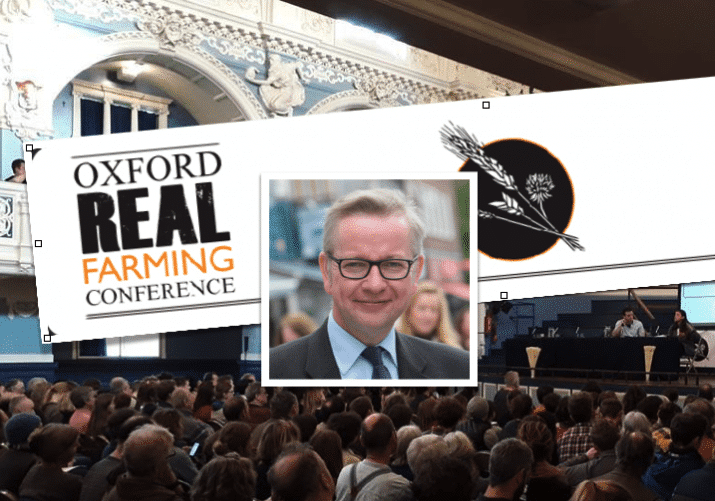 Ten years ago, in a gathering at an Oxford restaurant, the biologist and writer Colin Tudge and Ruth West launched the Oxford Real Farming Conference as a two fingered challenge to the ‘official’ Oxford Farming Conference. The new challenger was pro organic, pro pasture-fed and made up of truly caring farmers producing healthy food.

2019 was the year the Oxford Real Farming Conference actually overtook its conventional farming rival, selling 1,000 £40-a-day tickets for its two-day event at Oxford Town Hall – with no less than 600 on the waiting list.

At last year’s event Gove caused quite a stir with a speech that signalled a major change of direction for UK agriculture, which put conserving ‘natural capital’ at the heart of future food and farming policy. But the excitement that this development created within the UK organic community cooled quickly when Defra issued its keenly anticipated consultation paper ‘Health and Harmony’  – organic was mentioned just once in the entire document.

So, at this year’s conference the subject that kept coming up from the audience was just how committed Defra actually is to organic, and why the ‘o’ word is so conspicuous by its absence in the Government’s Agriculture Bill. Gove’s s argument was that the Bill was a flexible structure that could be added to and changed, but that he did not want to force future Governments into a no-change future.

But conference co-organizer Tudge still evidently has hopes for Gove’s vision for food and farming. “Michael Gove’s heart has been in the right place, which is more than the past three Defra ministers, who hadn’t a clue. He is a good chap, very intelligent. None of the past ministers had a clue about agriculture. I get the impression he likes us. He genuinely likes engaging and farmers are very intelligent so they don’t hold back.”

But there was suspicion from delegates at Gove’s reiteration of the importance of science in the future of UK agriculture, which was read as a signal that Britain is open to GM – a topic he as unwilling to get involved with on this occasion.

There was suspicion from delegates at Gove’s reiteration of the importance of science in the future of UK agriculture, which was read as a signal that Britain is open to GM

There were two interesting sessions which looked at retail and wholesale business. The first focused on the increasing disappearance of local abattoirs. This, particularly, has affected small organic farmers and producers. The consensus of the panel was that the public is increasingly concerned with animal welfare, and would be likely to support a campaign to bring back small and local abattoirs. Patrick Holden, founder and director of the Sustainable Food Trust (and former Soil Association director) made a case for the introduction of an ‘animal miles’ schemer which would reward smaller, local abattoirs.

There was a more upbeat session on building strong regional food retail and distribution networks. Simon Platten, project manager for the Tamar Grow Local scheme, explained how the initiative had started as a small organization to link local small growers, getting them to cooperate and bring them to market. The Tamar Project now cooperates with the procurement department of Plymouth Council, as well as a large Plymouth housing association where, under a public health scheme, free veg boxes are distributed to people within the local community for a period of time, when a health improvement opportunity has been identified.