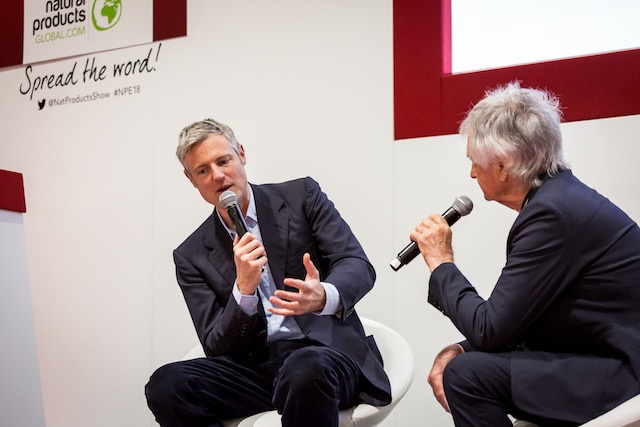 In April, Natural & Organic Products Europe hosted an eagerly anticipated session with Michael Wale in conversation with activist and MP Zac Goldsmith, in which he talked Michael Gove, GM, CAP and his role in the Tory Party. Here we take a look at some of the highlights

How did you first get involved in environmentalism?

I don’t ever remember not being agitated by what was happening to the natural world. All my life I’ve been involved in the environment, and the things I’ve done have all been a means to the same end. Whether it’s been running the Ecologist magazine, whether it’s been writing articles, setting up campaigns groups, raising money or being an MP, all those things are means to the same end, which is to try and advance a bit of sanity in relation to the natural world.

And do you think that this is happening?

Well, I think most of the trends are going the wrong way in terms of species loss, ecosystem destruction, the travesty of what is happening to the oceans, so I think in terms of numbers we’re going in the wrong direction, but I think there is something very positive happening, and that is a general awakening. The Government is talking big about aspects of the environment, and it is doing so partly because there are some people there who do actually care, but mostly because they are responding to what is an obvious public appetite for environmental policy, for common sense. And that’s not just a UK thing; this is a global phenomenon. It feels to me like there is something of a global awakening happening now, and I’m more upbeat about this than I have been for decades.

Why did you go into politics?

I felt that one of the advantages of being an MP was that I could try to lobby from the inside. It’s easier if you have direct access to the people who are making the decisions. Sometimes that means confronting cabinet ministers who are totally uninterested in these issues, and waging a really aggressive campaign. Other times it means working with ministers who are very much on the same page. I think a lot of people are surprised by what we’ve seen from Michael Gove in the last few months. It’s quite extraordinary. He’s done more as Secretary of State for the Environment than perhaps all his predecessors combined, and all in a very short period of time. It has been a surprise, but nevertheless a pleasure, working with him in the last few months.

I was amazed that you joined the Conservative Party – why aren’t you leader of the Green Party?

We face a crisis now, and I don’t think it is possible to exaggerate how perilous things are – we are desecrating the natural world. So we don’t need a ‘green party’ – any self-respecting political party has to have an answer to these issues, and when I joined the Conservative Party, in my view, it didn’t have any answers. So I felt it was part of my job to try to rediscover that green thread and weave it back through the Conservative Party, and that’s what I’ve been doing for the past seven years – with some success and some failure.

We face a crisis now, and I don’t think it is possible to exaggerate how perilous things are – we are desecrating the natural world.

The Green Party is a pressure group and exists to improve green policy across the board, but it behaves sometimes as if it’s going to be the next government and gets very cross when other parties take its ideas. I think sometimes it forgets why it exists – but I know why I exist and that is to try to make sure that the Conservative Party, as much as we possibly can, take these issues seriously. And I’ll keep on being a pain in the backside within the party until we do that.

Do you feel that maybe organizations such as the Soil Association and others don’t lobby hard enough?

Historically that has possibly been true, however I think their day has come. Whatever one’s views about Brexit, the one really exciting thing for anyone who cares about the natural environment is that we are going to be able to rethink the Common Agricultural Policy (CAP) – that’s £3 billion a year which we currently spend rewarding people just for owning land, no matter what they do with it. Under the new regime we’re going to have a system where that same amount of money is spent only in return for public goods or environmental goods, and for years that is what the Soil Association and many other organizations have been campaigning for.

Now is the time to campaign, now is the time to back up those ministers who are getting it right and help in every possible way to strengthen them in what will undoubtedly be a battle of ideas in the next few months, and possibly years. We just have to hope the right people win.

The language we are hearing from Michael Gove about what that means – what is a public good, what is an environmental good – so far at least has been 100% spot on. I can’t take issue with him on a single point in relation to what will happen to CAP. So this is a dream, if we get it through. The problem is that even though he has been saying some startling and inspiring things about where he will take his department and where policy will go under his watch, we don’t have unanimity in Government.

So now is the time to campaign, now is the time to back up those ministers who are getting it right and help in every possible way to strengthen them in what will undoubtedly be a battle of ideas in the next few months, and possibly years. We just have to hope the right people win. I’m doing everything I can to support Michael in what he has said he wants to do, and all the signs suggest that he means it.

A lot of money is spent by the Government on GM research, but hardly anything on organic. Why doesn’t Michael Gove tackle this?

The answer is I don’t know why. I hope that we’ll hear something strong and measured on this issue soon. If we do, it would be the first time we have from any Secretary of State, probably going back to Michael Meacher, who was pretty sound on these issues, and that was 20 years ago.

There is an obsession with GM food that I’ve never understood. It is sold to us as something that will alleviate world problems and feed the world’s hungry, deal with drought resistance and flood tolerance and all the rest of it, but it’s nothing of the sort. Almost every GM crop produced has effectively been about selling chemicals. Almost every GM crop we have in the world today has some form of pesticide resistance in it.

It has always been patently clear that GM food is a mechanism for enabling some very large corporations to maximize their global reach and gain ever more control over the global food economy – that’s what it’s about, it’s not about solving problems. And what’s fascinating is that if you look at some of the claims around drought resistance and flood risk tolerance, for example, we’ve had no success from GM at all. None. Despite all the hype and all the promises, there’s nothing out there that answers all those giant questions.

But we do have answers from another form of biotechnology, which is traditional hybridization where we are seeing crops which have already been developed that are drought resistant, and flood tolerant, and it’s happened at one-fiftieth of the cost of developing GM crops. But you can’t patent crops that are born through traditional hybridization, so there’s no money in it for the likes of Monsanto.

You praised Michael Gove, but when he moves on will his forward-thinking last?

It depends when he moves on. There are some things he still needs to do that will cement his legacy in that department. For example, we’ve got the Withdrawal Bill going through parliament at the moment and we’ve had promises from him that as we leave the EU we will create a new body that would effectively replace those functions performed by the commission in terms of holding Government to account with regard to environmental rules and regulations. The body he has described is exactly what we need to create a world-class regulatory system in this country to make sure we do what we’re supposed to do in relation to the environment. But there are people in the Government who don’t want it, so I want the ball to begin rolling properly on that issue before he moves on. 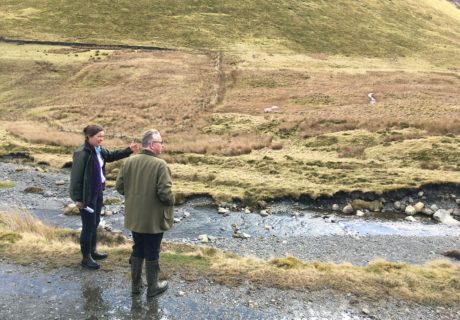 We also need to ensure the principles of environmental law in the EU as well as an agreed upon formula for what regime will replace the CAP before he moves on. If we get these things in place then I think we can be fairly confident that we’ve set ourselves on a particular journey in the right direction, whoever takes over. I think that at this stage it would be disastrous for him to go; I want him to stay put until he’s finished the job. But it’s not up to him.

Whatever one’s views about Brexit, the one really exciting thing for anyone who cares about the natural environment is that we are going to be able to rethink CAP

What’s amazing is that we’re having this discussion about Michael Gove. His share price couldn’t have been much lower. I remember during a debate in parliament a few months ago Caroline Lucas commented on how excellent he’s been, but said the problem was who’d replace him? I don’t think anyone could have predicted you would hear that line from our only Green MP! He has taken the world by surprise.

Would you like his job if he were to move on?

There is literally zero chance of that happening. On the whole, governments don’t like activist ministers and I am an activist, I am a campaigner. And if I was a minister I would like to change things. I wonder sometimes whether if people knew how revolutionary Michael Gove was going to be in the very short time that he’s been at Defra he would have got the job.

If you were to give up politics, what would you do?

I have devoted my life and I will devote the rest of my life to trying to make sure that we restore a bit of balance to the world and that the magic of the natural world is not completely destroyed – that’s what I do, that’s my life. If I’m not in politics, I’ll always be political and still continue to campaign in whatever way I can. When I was very kindly sent on a six-month sabbatical by my constituents, I spent that time campaigning as hard as I always have on a whole range of environmental issues, and that’s what I’ll always do.